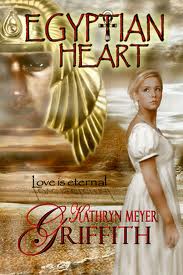 Synopsis:
Maggie Owen is a beautiful, spirited and lonely Egyptologist. Even being in Egypt on a college grant doesn’t give her the happiness she hoped it would. There is something missing. Love.

Her workmen uncover Ramose Nakh-Min’s ancient tomb. An amulet hurls her back to 1340 B.C – where she meets noble Ramose, who faithfully serves the heretic Pharaoh Akhenaton and his queen Nefertiti.

She’s fallen into perilous times with civil war threatening Egypt. She’s mistaken for a runaway slave. With her blond hair, jinn green eyes and fair skin she doesn’t fit in. Some say she’s magical and evil. Ramose’s favorite, Makere, attempts to kill her.

The people, angry the pharaoh Akhenaton set his queen Nefertiti aside and forced them to worship his god--Aton rise up against him.

Maggie’s caught in the middle of it. Desperately in love with Ramose, can she stay alive and with him in ancient Egypt? Will she make a difference in his world and history?

They say love can be found in the strangest of places, but what about thousands of years in the past?

Maggie Owens never believed in true love until she was sent back in time to 1340 B.C Egypt. It is here that Maggie Owens adventure begins and she soon realizes that going home may not be what she wants after meeting a handsome Egyptian warrior named Ramose. Now she must fight to stay alive, to protect her new found friends, save an ancient Egyptian queen, and to keep her true love.

Maggie Owens was a strong character with a lot of depth. I enjoyed reading about her adventures in the past and it was really believable. The story was well thought out and didn’t just throw the character into another time. There were reasons for what happened and all of the loose ends were tied up. The characters really made me feel for them. I was actually afraid for them when they were being attacked and sad when something went wrong. My favorite part of the whole book however was the relationship between Ramose and Maggie. They didn’t start out on great terms, but gradually grew to love each other. Their love for one another was really sweet and endearing as well and made me envious. Transport yourself back to another time and place where true love really does exist and check out Kathryn Meyer Griffith’s “Egyptian Heart”.
4 stars adult review romance time travel