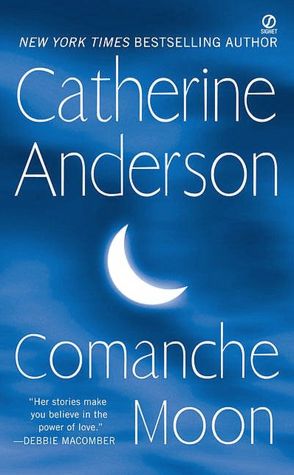 Title: Comanche Moon
Author: Catherine Anderson
Publisher: Signet; Reprint edition (May 6, 2008)
Book Rating: 5 stars
Source: Bought
Synopsis:
Orphaned after her parents were killed by Comanches, Loretta Simpson still lives in terror that the warriors will return, her fear so powerful, she is no longer able to speak a word.

Hunter of the Wolf believes that Loretta is a woman of ancient prophecy whom he must honor. But Loretta can only see him as the enemy who has kidnapped her, and she refuses to succumb to his control—or his touch.

Despite the hatred between their peoples, Loretta and Hunter gradually find their enmity changing to respect and care. In the midst of such conflict, it will take all the force of their love to find a safe haven.
Buy Links

Hunter was an alpha male hero who does what he has too to get what he wants. It took him a bit to warm up to Loretta, but once he did he fell hard. He fell in love with her and even though he could have taken her whenever he wanted he waited for her to be ready. Hunter was patient and kind with Loretta.

Loretta did not have great experiences with the Comanche in the past and because of this steadfastly fought any feelings of affection she had for Hunter. I really liked her she was strong and very brave. The relationship between her and her cousin Amy was very sweet and you could tell that they had a strong bond.

The relationship between Hunter and Loretta was sweet and heartwarming. They had many obstacles in their way, but were able to find their way back to one another against all odds.