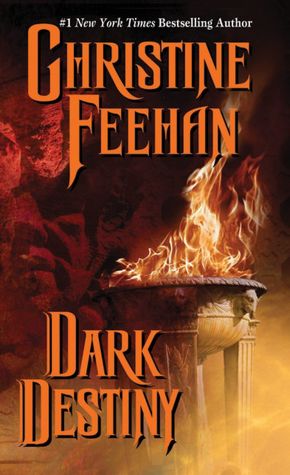 Destiny saw her family slain by a vampire, who then raped her and turned her into one of the undead. But through a telepathic link with Nicolae, a member of the Carpathians, who hunt vampires, she survives, and becomes fond of her Seattle neighbors. Then, as she drags Mary Ann, a woman who rescues battered women, into a church to save her from a vampire, Destiny discovers that she herself is not a vampire because she can enter holy ground and see herself in a mirror. Nicolae, who has been seeking his life mate for centuries, finally finds her, and together they fight to save the neighborhood from evil both vampiric and human.
Buy Links
Amazon – Barnes and Noble – Book Depository
My Thoughts

Dark Destiny is one of the more intense Carpathian books I have read. There is tons of action as well as romance going on in this novel. In this book Nicolae has finally caught up to his lifemate and is anxious to finally meet her. He is also accompanied by his brother Vikirnoff who helps out when he is needed.

Destiny was not born Carpathian, but was changed by a vampire when she was a child. It is because of this that her blood is poisonous to herself and other Carpathians. Destiny was a very strong character with a lot of depth. I really felt for her and her fear that she was evil. She has a good heart and because of this the thought that she is somehow tainted tortures her, but she very rarely shows it. The development of a relationship with Nicolae was believable and sweet.

Nicolae has waited a long time to meet her and feels guilty because he was unable to save her as a child. He is not overly protective like other Carpathian males. He actually stands back a bit allowing Destiny her space. He does watch over her though helping out whenever he is needed. He really was a sweet guy and when these two finally come together it is definitely worth it.