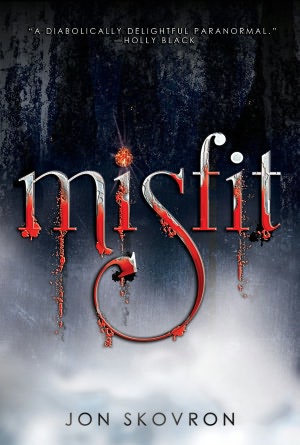 Synopsis:
Jael Thompson has never really fit in. She's changed schools too many times to count. The only family she's ever known is her father, a bitter ex-priest who never lets her date and insists she attend the strictest Catholic school in Seattle. And her mother--well, she was a five thousand year old demon. That doesn't exactly help.

But on her sixteenth birthday, her father gives her a present that brings about some unexpected changes. Some of the changes, like strange and wonderful powers and the cute skater boy with a knack for science, are awesome. But others, like the homicidal demon seeking revenge on her family? Not so much.

Steeped in mythology, this is an epic tale of a heroine who balances old world with new, science with magic, and the terrifying depths of the underworld with the ordinary halls of high school.
Buy Links
Amazon – Barnes and Noble – Book Depository
My Thoughts
Enter a world where everything you knew about Demons is about to be tested.
The intriguing world that Jon Skovron creates in Misfit will have you turning each page in anticipation. The demons in this story are unique and sometimes quirky and I couldn’t get enough of them. Each one was a new and interesting character that I had a fun time getting to know even the evil ones. My favorite character however was of course Jael.
Jael’s mother and her life was also shown throughout the story and it gave me a chance to really understand her as a character. There were definitely some intriguing things I found out about Jael’s mother.
Jael was a fun character to get to know and had some great depth to her. From a young age she knew what she was, but it wasn’t until her dad gave her an unusual present that thing really started getting out of hand. Jael also grows a lot throughout the book and it was fun getting to know her and seeing how she handled all of these new situations being thrown at her.
The love interest, Rob, was a very fun character and every time he came around he would bring a smile to even the gloomiest face. I loved seeing how he and Jael interacted with one another.
“Misfit” is an exciting new paranormal book for teens that I highly recommend to paranormal lovers of all ages.