Interview with Emma Daley author of The Propheticus 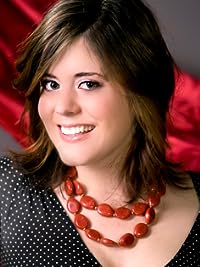 At only the age of three, you could find Emma perched in the center of the dining table, a tape player in her lap, while the other kids gathered to listen to her recite her own creative version of her favorite tales like "Jack and The Bean Stalk" or "Peter Pan". Her imagination was fueled when she signed up for a high school Greek Mythology class. It was there in high school Mythology class that Emma found her dream. Her teacher recognized her talent, and encouraged her to pursue a career in the one thing that brought her imagination to life, writing. As a military wife and with life's fast pace and strenuous demands, it wasn't until she was 26 that she finally decided to pursue those long forgotten dreams. She started her very first novel Propheticus in November of 2008, which will be released in December of 2010 and is working on the 2nd and 3rd sequels, with several other book ideas on the shelf waiting to be dusted off and put into words.

Anything out in the sunshine; hiking, (my husband coaches track and field and I love going to their meets, especially when it's nice and sunny), playing in the park with my dogs or my nephew. Then go out to dinner and relax at home later with some kind of dark movie :), I'm a sucker for horror and thriller films. I always need some good inspiration.

I actually had to do some research for the title. I was trying to think of what to title my book when I was working on the first one, I woke up in the middle of the night with this whisper in my ear of the name Propheticus. I wasn't sure what it meant so I looked it up, I knew that I wanted Italian roots to be in my book because of Vampire myths where everything started in Rome. My purpose of this book, although not in the beginning, was to start a myth that existed even before any modern day myths started and in a way, where these Vampires might have even possibly come from. So when I looked up Propheticus and it had an Italian meaning that was ancient, I loved it! Then I had to research the subtitles to match. I actually researched some about tribes in brazil that depended on berries that were out in the desert. That was kind of after writing about this part in book one, but it may have helped me add in some things. As i went throughout the books, I researched ancient weapons and artifacts and animals and symbols.

I loved writing Novel. It was such a challenge to write form his point of view because he is male, but what I loved about it is that I could create this male that was just what I wanted (how many time do we wish we could do that in real life). He had so much potential for adventure which I loved, and I got to write Dyna and Aniah from his point of view which was just so fun. I like a lot of things form his male point of view.

4.       Were any of your characters or events from the book based of real life people or experiences you have had?

I have thought a lot about this because essentially I didn't think that I was specifically patterning them after anyone, well some of them. Aniah was a piece of me but she was only a portion. I think everyone has different aspects of their character. I though of my naive, vulnerable side and that was how Aniah started out. Her mother was a portion of my Mom and also of how I might react if I were a mother. Novell was named after a friend of my husband that passed away years ago and his character is based off of my husband who is from London. He used to be a bodyguard with lots of experiences, but Novell was also a part of me that I fell like has the desire to be brave and nomadic, and wants to have adventures. Dyna, I felt like is the shy and mysterious part of me, the side that watches people and has a purpose no one knows about, not to mention I guess when everyone dreams of being a superhero or something that is who I dream of being, this person that is strong who can kick some butt, but perceptive. Essentially though, I felt like a lot of the character were just pieces of me that I wanted to be or felt like I was. That was the characters in the first book, after that the other characters just came to be because I had just imagined them, that they needed to be a part of this story. I did name some characters after friends and family, people that asked to be a character :).

5.       Are there any other projects you are working on that you would like to tell us about?

I am working on a few projects right now that I am very excited about. One, is called "The Elaina Detrix Project", It is about a high society New York Socialite and trendsetter. She hangs out with New York's finest Doctors, Lawyers and Cosmetic surgeons. He love interest is a Dr. Brian Cole who is a Geneticist. One night they are joking around about some research that Brian is working on to alter human DNA. After Elaina convinces him, Brian agrees to experiment on Elaina to try and alter her DNA and test his theory on her that he could make a human being grow a pair of wings. It works! And when they realize that you can make the human body do anything i.e. breath fire, scale walls etc. they realize how dangerous this could be in thanes of the human race. But when they can no loner hide their secret, and everyone finds out what Elaina Detrix has, they all want it! The revelation of their secret could potential ruin the human race forever. It is a Sci-fi thriller.

6.       Did any of your characters give you a difficult time while writing this book?

Novell was so complicated, his story had to be complex and precise, so it was really hard working out exactly who he was, where he came from and what he wanted in life. But, that was also what made him so fun to write.

Anything with lots of sugar. I love the taste and smell of coffee, but I got have some cream and sugar in there. A little salted caramel :)

Write :( I'm a freak I suppose. I like to get out and do things; relax by the pool, go out and listen to good music. But I love putting all my ideas down on paper. It's so fun to be a part of that story world.

9.       Was there anything in particular that inspired you to write about this world?

I had a dream when I loved in Alaska, a place that I felt was dark and ominous in the winter season. In this dream my characters lived in a place that was different, with clay ground and a scientific background. The rest I had to imagine from there. There wasn't much life around and things were still primitive in my dream. But as the story developed and the characters with it, i Imagined what types of placed they might come from.

I had to relate to Aniah a lot to see how she would react to her destiny. We are all naive when we are born and even till we reach about the age of  'teenager', then we learn how harsh and cruel life can be. We love, we loose, we mature and gain responsibility. We are all destined to be something great and we have to choose to do that at any cost. We will loose loved ones and experience trials that will change us into the people we need to become to conquer that destiny. I grew up up with a naive perception of people and life, I used to think that I could kill evil with kindness. I know now how hard that can be, but it can be done. And we can be strong and keep going, even when it seems life has come down on us.
Interview with Emma Daley author of The Propheticus