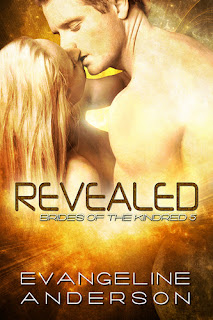 
Synopsis:
Nadiah has the Sight—the ability to see into the future. But the one thing she can’t see is how she’s ever going to be free of the blood bond her parents forced her into when she was only six. Her fiancée is an evil bastard who delights in torturing her and her only way out of a loveless marriage is for a Kindred warrior to challenge the hated bond. But Nadiah has no warrior to challenge for her—she just has Rast.

Adam Rast doesn’t know why he feels so protective and possessive of Nadiah, only that he’s willing to kill or die to protect her. When the chance to set her free arises, he takes it without hesitation, even though his lack of Kindred blood could mean his defeat or even his death. But Rast has a secret, one even he doesn’t know he possesses. When he undertakes Nadiah’s quest, the truth comes out in a strange and provocative way.

Can Nadiah and Rast live through their ordeal? Will the truth about Rast set them free…or kill them? You’ll have to read Revealed to find out.

My Thoughts
“Revealed” is an engrossing read that will leave you with a desire that nothing of this world could ever satisfy.
Once again this author has created a wonderfully imaginative and unique new world of aliens. The worlds and new creatures that we continually learn about in this series keep getting better, more ethereal, and deadlier. The beautiful worlds that this author comes up with never cease to amaze me and the descriptive imagery makes me feel as if I am there with them discovering these provocative new lands.
The new threat will be revealed along with a long held secret that will turn the kindred world on its axis. We get to see a glimpse of the new enemy in this story and what is sown is even worse than the scourge. I liked reading the Villains point of view and how much depth he had. This villain was not only evil, but had a purpose that extended far beyond that.
The main characters Rast and Nadiah are two characters that I was hoping to hear more from for a while. They are both wonderful people and their story is one you will not want to miss. Rast is an incredibly noble and courageous man who doesn’t back down from a fight. When he made the decision to fight for Nadiah no matter the cost it only endeared him to me more. He goes through a lot on his journey to save Nadiah and it really shows how brave he really is and how much he truly does love her. His story was not all serious however. There were plenty of hysterical moments that happened on his journey that will stick with me forever. Let’s just say Fear Factor has nothing on the Tranq. I also loved reading from his point of view. How he handles everything and reacts to the different situations was highly amusing to me at times.
Nadiah was a great character as well. She was so sweet and so full of life even knowing what may happen to her. I also liked that she grew a lot throughout the book. I was able to see her transformation from a young girl into a fully fledged woman. She had more than one transformation and I must say how she gets a new eye color was one of my favorite parts of the story and Rast was a wonderful lover (Warrior angel is a perfect description of him).
Fans of her series are sure to love “Revealed” which is even better than the first 4 books. I also highly recommend Evangeline Anderson’s Kindred series and be warned this series is extremely addictive.