"Her Norland Warriors" by Becca Van 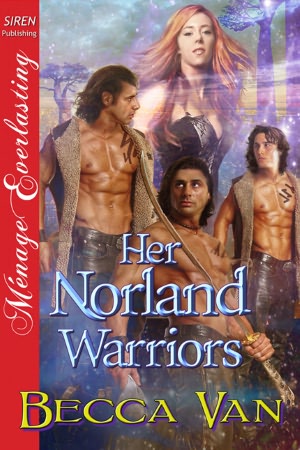 Jessamine Flanagan is on her way to the resort planet of Paradiso, but she never makes it. After the engines on the spaceship fail, Jess is abducted by the three large warriors who rescue the ship's passengers. The warriors who take Jess—Hakon, Dagr, and Loki Sigmund—are the leaders of the raiding party and the southern realm on the planet Norland. Back on their home planet, the huge, sexy warriors claim Jess is their bond mate, but in a world where females are scarce, the men must keep Jess hidden from the other warriors who would claim her as their own. Hakon, Dagr, and Loki must try and convince Jess that her heart and body are safe in their hands—forever. Will they succeed? ** A Siren Erotic Romance


My Thoughts
Jessamine is hoping to finally get some rest and relaxation on the resort planet of  Paradiso, but nothing goes according to plan when three dead sexy warriors are thrown into the mix. Hakon, Dagr, and Loki are enamored with Jess after meeting her and end up kidnapping her and taking her to their home planet. While there they have to not only keep other males from trying to claim her as their own, but convince Jess that they are the men for her.
Jess was a sweet character and was very likeable. Even being as sweet a she was she never let them push her around. She gave back just as much as she got which many times lead to some very heated moments between her and her warriors.
The three warriors Hakon, Dagr, and Loki were very easy to fall in love with. They may all have different personalities, but together they had one thing in common and that was their love and devotion to Jess as well as their big hearts. These men were all fire and it showed. They had skills not only in how to defend themselves as well as Jess, but in other areas as well and used all of their skills to convince their lady love to stay with them as well as protect her.
I loved getting to know each of these characters and their personalities and have come to love them as I’m sure many other readers will as well. I highly recommend this book to anyone who loves a great erotic romance with some very sexy warriors and a bit of action as well.