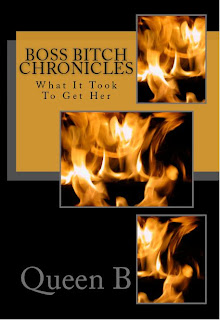 Title: What It Took To Get Her Part 1 (The Boss Bitch Chronicles)
Author: Queen B
Rating: 5 stars
Source: Bought

Chelsea Jones is a 16 year old junior in high school who was raised in the back woods of Louisiana. She was raised by her mother and her mother's parents.

Growing up in a very religious and strict household, she find herself stuggling to stay level headed and not rebel. Screaming for freedom, she instantly fell for Rashad Rodriguez, who is a notorious Ohio gang banger who has recently been incarcerated. And boy does he come with alot of baggage and trouble. Although they are from different worlds, they instantly fall in love and Rashad unintentionally drags Chelsea into the line of fire. Will Chelsea and their growing family make it out alive or will they get burned?

This was a fun and action packed read that is really able to grab and hold your attention from the very first page. Lots of sexy heroes and steamy encounters will have you running for a cold drink or a bad boy of your own.

Chelsea was a character that many readers are able to relate to because she has that rebellious streak in her that all of us have had at one point. She was really fun to get to know and I was really excited to see how she handled her relationship with Rashad.

Rashad is your typical melt in your mouth bad boy that girls dream about, but there was so much more to him. Rashad brought just the right amount of danger into Chelsea’s life and into the story.  I had a great time falling in love with him (or at least lust) right along with Chelsea.

Fast paced action and steamy encounters will have readers begging for more in “What It Took To Get Her”.