Half in Love by Lea Barrymire 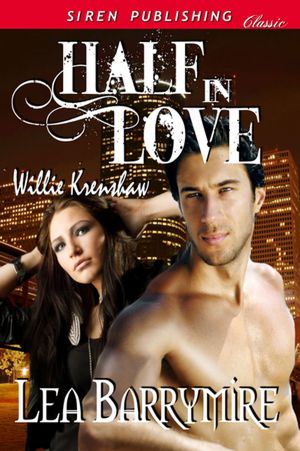 Willie Krenshaw wanted nothing more than a few minutes watching the waters of Lake Erie after a long workday. What she ended up with was a drugged male vampire and an itch to be a Good Samaritan. When her inner kitty starts sniffing around at the male she's helping, she knows Fate's evil sense of humor is in full swing. Being a shifter-vampire hybrid is hard enough, but having a male vampire as her fated mate is just too much. Nickola, the vampire she assists, finds her breathtaking and does all he can to push Fate's agenda. Stephen is the male vampire Nickola is investigating for the Council. He takes aim at the couple, intent on pulling Nick to his side or killing him. Between Stephen's scheming and the Council's interest in Willie, can they survive the chaos long enough to test the depths of their passions?

Willie just wants to relax for a few minute watching the waters of Lake Erie. Instead she ends up with a drugged male vampire and she couldn’t resist helping him. Things get worse for her when her inner kitty starts sniffing around the vampire. She then realizes fate’s evil sense of humor is in full swing. It’s bad enough being a shifter-vampire hybrid, but having a vampire as her fated mate is way too much for Willie. The Vampire in question ,Nickola, finds her to be irresistibly breathtaking and has no problem with helping along fates plans. Unfortunately the vampire that Nickola was investigating, Stephen, takes aim at them with the intent to either pull Nick to his side or kill him. Will their love last the test of Stephens scheming and the Council’s new interest in Willie?

This is a fun and exciting story of romance and interfering vampires. I loved seeing the relationship between Nick and Willie bloom. These two were great together and the dangerous enemies that try and tear them apart kept me riveted to the pages.

Willie is feisty and has a stubborn streak a mile long, but she may have just met her match in Nick. She was a fun character to get to know and I had a great time seeing her try to resist Nick.

Nick was sweet and sexy. His attempts to persuade Willie ranged from hilarious, romantic, and downright temptation incarnate. These two were a great team and I couldn’t wait to see how everything worked out.

For a fun and exciting new read check out Half in Love by Lea Barrymire!