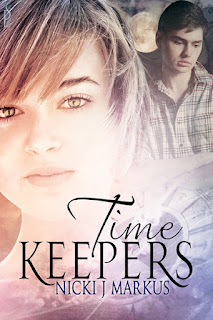 In the not so distant future, Supernaturals have announced their presence to the world. But now a secret government agency is rounding them up, hoping to use them for its own purposes.

With Supernaturals going missing every day, Nick has been careful to guard his own secret, never giving anyone reason to notice him. That is until Ellie comes careering into his train carriage.

Instantly drawn to her, he tries to help. But soon both their secrets are revealed and they find themselves on the run in a desperate bid to escape from the mysterious Time Keepers, whose net is closing in around them.

A day I actually get time to write! I started a new full-time job at the end of April and I just don't have as much time for writing as I did prior to that. The perfect day for me would be a day when I was off work, had all online stuff up-to-date and could sit down to put pen to paper. It would be warm and sunny so I could have the door open. I'd have a nice refreshing drink beside me, perhaps a bar of chocolate and a good two hours without interruptions. But these days, that's really a pipe dream and it's more a question of stealing an odd bit of time when I can.

None for this novel really as it's set in the near future. I am considering writing more historical paranormal in the future, and then I'd be hitting the books, researching my favourite historical periods.

Why did you decide to do a time travel/ werewolf story?

This one came into my mind at a time when I'd finally seen the film of The Time Traveller's Wife and was watching a bit of Being Human and True Blood. So the idea grew from a bizarre mix of those running round in my mind. Plus, I do tend to write more vampires than anything else and I thought it was time to let some other supernatural creatures have their turn.

I enjoyed writing Ellie as she is so feisty and great fun, even when facing adversity. I also enjoyed developing Nick, though. It was great to watch him grow from a uncertain young man to someone willing to scarifice himself for others.

Not particulary; although, some of Ellie's physical attributions, such as the pixie cut, were based on my sister who had that look a few years ago. She's not quite as petite as Ellie, but she has a mischevious smile that I always picture on Ellie too.

Did any of your characters give you a difficult time while writing this book?
I think Adrian was the most challenging as he is one of the more complex figures in the book, constantly swaying between 'good' and 'evil'. Time Keepers began life as a four-part short story series back in 2011. Adrian was a fairly minor character then, but I have expanded him a lot in the new novel-length version of the story, giving him more of a backstory and looking more at his motivations.

Well, I am half-way through the first draft of a new vampire story. It's been on hold since I started my new job, but I am hoping to pick up work on it again soon. I also recently came across a story I wrote about 8 years ago and I am thinking of reworking that in the near future as well.
Cappuccino or CoffeeOh, Cappuccino for me. Being English, I am more of a tea drinker. On the rare occasions I have coffee (and I only drink it in cafes, never at home), I usually have either a cappuccino or a latte.

Well, I actually have a huge number of hobbies and interests. In fact, I probably have too many as it is hard to find time to fit them all in. When I'm not at work (and not writing) I read, I am an avid theatre-goer, I enjoy films, too, and certain TV programmes. I love photography and sketching (DeviantArt). I sing and play flute and piano. I work on my foreign languages and write to my many penpals around the world. Oh, and I do some cross stitch. Phew! 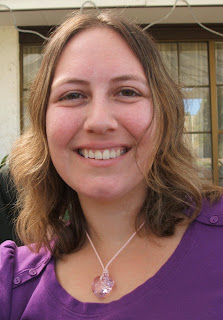 Nicki J Markus was born in England in 1982, but she now lives in Adelaide, South Australia with her husband. She has loved both reading and writing from a young age and is also a keen linguist, having studied several foreign languages. She has completed a BA (hons) English with French from the University of Greenwich, London and a PGDip in Translation from the University of the West of England, Bristol. She is currently studying for diplomas in Editing and Publishing.

Nicki J Markus launched her writing career in 2010 and her fiction work has been accepted for ebook publication by both Wicked Nights Publishing and Silver Publishing.

In her spare time, Nicki J Markus also enjoys many other creative pursuits including music, theatre, photography, sketching andweb-design. She also has a keen interest in history, folklore and mythology, pen-palling and travel.


Thank you again for visiting Curse of the Bibliophile!
Interview with nicki j markus