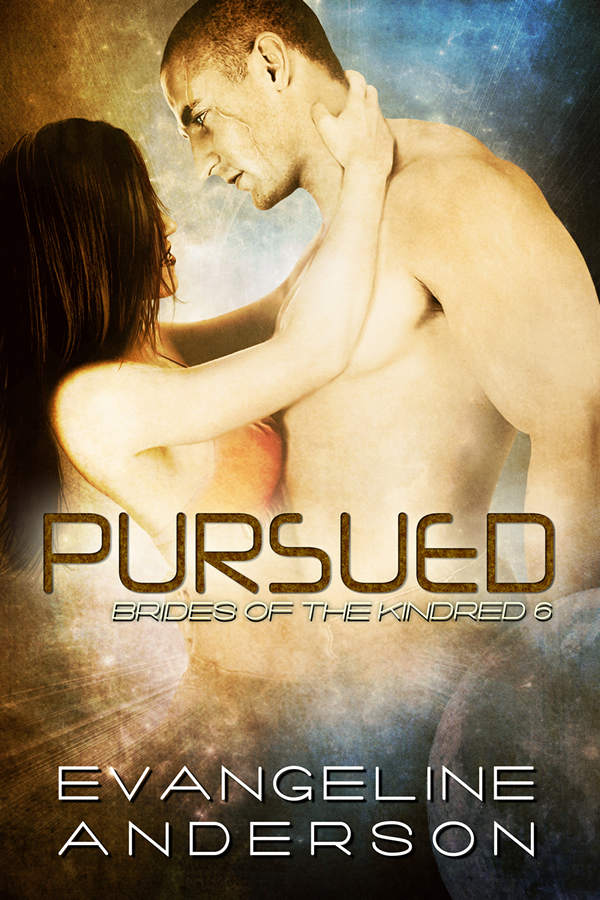 Elise is fractured inside, stained by a past she refuses to remember.

Merrick is scarred both inside and out, a half-breed with a brutal background, at home nowhere in the universe.

Now they are tied together by an unstable bond which could kill them both.
Their journey will take them to the lawless planet of Rageron—the wildest of all the Kindred worlds. There, in the deep blue jungles of an alien world, Elise must bare her soul and relive the horror that nearly killed her. Can she and Merrick make each other whole or will Elise run from her pain?

If she does, Merrick cannot help but chase her…Elise is being Pursued.

This is the 6th book in the Brides of the Kindred series. You will need to read Claimed, Hunted, Sought, Found, and Revealed, also by Evangeline Anderson in order to understand it.

The long awaited Pursued has finally been published and the wait was totally worth it!

Merrick the scarred warrior and best friend of Sylvan found a young woman named Elise who had been tortured by the scourge frozen in a stasis chamber. He saved her life by bringing her back to the mother ship and since then the two have become very close, but things go sour when they find out Elise has a fiancé. Merrick is determined to forget her, but that soon becomes impossible when they find out that they somehow formed a very dangerous soul bond that requires Elise to be at his side constantly. Now in order to save them both they must brave the dangerous jungle of Rageron and find the pain vine. Will they find the plant before it’s too late or will they finally be able to deal with the past to discover a love worth fighting for?

This story was so full of emotion that you better be ready for a rollercoaster ride that will have you wishing for a Merrick of your own. Both of these characters have had pasts that haunt them to this day. There was a lot of character growth in this story and I couldn’t help but feel for these characters they went through a lot and still persevered and became better people for it.

Elise is a passionate young woman who never had the chance to really let herself go. She is also fiercely protective of those unable to protect themselves such as children and animals. Elsie is also unfailing kind and yet a bit stubborn. She is a great influence on Merrick and brings out the best in him.

Merrick is the tough as nails warrior who is used to being alone. He is noble and kind in his own way I couldn’t help falling in love with him. The way he protects his loved ones and always tries to do the right thing is amazing and I cannot believe that he actually believes that the goddess wouldn’t care about him. He is good for Elise and truly cares for her I loved this pairing more than any other in the series simply because they are so amazing together.