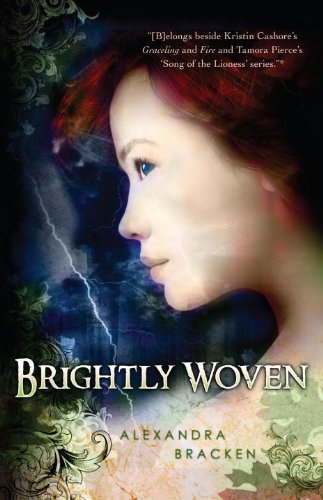 When Wayland North brings rain to a region that's been dry for over ten years, he's promised anything he'd like as a reward. He chooses the village elder's daughter, sixteen-year-old Sydelle Mirabel, who is a skilled weaver and has an unusual knack for repairing his magical cloaks. Though Sydelle has dreamt of escaping her home, she's hurt that her parents relinquish her so freely and finds herself awed and afraid of the slightly ragtag wizard who is unlike any of the men of magic in the tales she's heard. Still, she is drawn to this mysterious man who is fiercely protective of her and so reluctant to share his own past.

The pair rushes toward the capital, intent to stop an imminent war, pursued by Reuel Dorwan (a dark wizard who has taken a keen interest in Sydelle) and plagued by unusually wild weather. But the sudden earthquakes and freak snowstorms may not be a coincidence. As Sydelle discovers North's dark secret and the reason for his interest in her and learns to master her own mysterious power, it becomes increasingly clear that the fate of the kingdom rests in her fingertips. She will either be a savior, weaving together the frayed bonds between Saldorra and Auster, or the disastrous force that destroys both kingdoms forever.

Spellbinding read that will lead you on the journey of a lifetime!

It has been a while since I have read a book with wizards and I was not disappointed. The world building was fun and imaginative. It actually put me in mind of a world similar to Eragon’s from (Eragon by Christopher Paolini) except that it was more lighthearted and humorous. This story has a bit of a mystery about Sydelle from the beginning which really kept me guessing. I really enjoyed all of the little hints along the way mixed in with a lot of humor. Another thing I appreciated about this book was that there was no Insta love like they have in a lot of YA books. The characters weren’t very fond of each other from the beginning either, but throughout the journey they got to know each other little by little and became close friends and maybe even more.

The characters were fun and unique. Sydelle wasn’t a warrior goddess, but neither was she a wilting violet. She didn’t allow North to control her despite her circumstances and when he did something that didn’t sit right with her she let him know it. I would have loved to have Sydell as a friend and I got really attached to her throughout the book.

North was not a dashing, charming, and romantic hero, but he was quirky, funny, and brave. He fought his own battles and was a really good person. I really enjoyed getting to know him and loved him as the hero.  One of my favorite traits of his is the fact that he has the worst sense of direction, which gets them into trouble sometimes, but always made me laugh.

There was a lot of action and tons of humor along the way and the only thing I didn’t like about this book was that it was too short despite it being 368 pages long. I do hope that the author decides to write a sequel in the future because I would love to see more of these amazing characters whom I’ve come to love.

This is an adventurous story full of humor and hardships that fans of fantasy are sure to love!