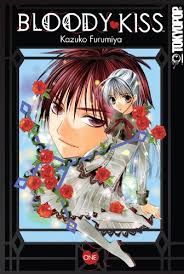 Kiyo Katsuragi is a young girl still attending school, when she is about to inherit her grandmother's mansion given to her mother. When she enters, she finds out she is also living in the mansion with two vampires, Kuroboshi and his servant Alshu. Things get even crazier when Kuroboshi decides to make Kiyo his "bride". A vampire's "bride" is a female human who will become his only source of blood. Even though Kiyo seems to like Kuroboshi, she gets embarrassed when he tries to suck her blood, which is a problem for Kuroboshi. Then, Kiyo's childhood friend tries to stop their growing affection, because he is afraid that Kiyo will be tainted by the vampire. Kiyo is then told that if she wants to be with Kuroboshi forever and be his bride, she will have to kiss him. There is one side effect-she might turn into a vampire herself!

My Thoughts
Hilarious comedy with a sweet romance!

I really enjoyed this manga and it has actually become one of my favorites. It is a simple and quick read, but has some great underlying messages that we can all learn from. Kiyo is a tough girl who has learned how to be independent from a young age. I really liked how she could still be kind even after all she has been through and has kept true to herself.

Both Kiyo and the vampire Kuroboshi grow a lot throughout these two volumes. Kiyo learns with the help of her friends that it is ok to ask for help sometimes and that it doesn’t mean you are weak. Kuroboshi softens a bit when it comes to humans. I found him endearing and I liked that he shows his love more with actions rather than words. So many books rely on what the characters say in romances which is great! However it is nice to see the different ways of showing someone your affection and it makes him even more relatable that way. Many of us tend to show our love and affection a bit differently (especially men) so it was nice to see some of that in this character.

Alshu was a hilarious character who always got me to laugh even when the situation was really serious. We didn’t get to see a lot of his character unfortunately, but I really liked how he added to the story and helped to keep it light while still having a serious note to it.

ART: The artwork was simple and clean, but It reminded me of the Victorian era even though this story is based in modern times. This actually helps to set the mood in this manga and give it a mysterious vibe, especially in the beginning. That is why I give the artwork a 5/5!
4 stars manga paranormal review shojo