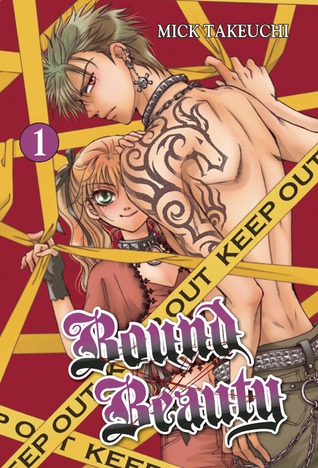 Legend says that fated lovers are bound together by an invisible red thread. Most people think it's superstition, but seventeen-year-old Chiyako knows better -- she can see them! Yearning to be an independent adult, she's struggling to earn enough money to move out of her parents' house. Her path is clear, until a chance encounter with a mysterious group of hot guys known as the Tyers shows her that she has the power to pull all of fate's strings...though doing so binds her into the form of a child!

Becoming an adult can be so hard and it gets even worse when you go back to being a mere child!

I was really interested in this book after reading Mick Takeuchi’s other series “Her Majesty’s Dog” and I was not disappointed. This story combines interesting mythology with some memorable characters. In this first volume there was some mystery regarding Chiyako’s former calligraphy teacher, Akeo. Not only that, but she meets a rather eclectic group of characters with powers similar to hers. I liked that there was a decent amount of action as well as a bit of background on Chiyako. There was a few questions answered, but even more that were brought out by the answers.

As for the mythology I really liked how they added this into the story. The legend of the red thread has always fascinated me, but I have never heard of the different colors of the thread which in this book all have different powers. Chiyako accidentally summons the white thread and in doing so loses her most precious desire which in her case is to become an adult and so she changes into the form of a child. Each of the characters in the group has a different threads power and all have lost something valuable in return.

Chiyako is a great heroine and I love her spunk. She is a lot of fun and it is rare to see her in low spirits for very long. She is definitely a very interesting character and I hope to get to know more about her in later volumes.

There is a bit of romance going on though I believe it is more of an unrequited one. So far I am not sure how I feel about the love interest for her. I want to know more about Akeo before I make up my mind and something tells me there is a lot more to him than meets the eye.


Overall this is a fun new series that I can't wait to read more of!

Cover Love: Ok I don’t normally comment on covers, but this one is really gorgeous! Also I thought it funny that the guy on the cover isn’t the main love interest. He is Hirotsuna and he has the power of the gold thread. Maybe he will become a love interest in later chapters?
5 star manga mythology paranormal review romance