“We're excited to announce that Big Bad Bite had a makeover! Inside and out! We have a sexy new cover featuring our favorite Wolf, Adam, AND Big Bad Bite was sent off and edited by the amazing girls at C&D Editing.

The answer to that would be yes and no. No, because the story line is still the same. Yes, because it no longer has those pesky grammatical errors, info dumps were cut down, inconsistencies were caught, and best of all, a tiny scene was added! Overall, it's a better story, but still has a kick ass, snarky heroine Jenna, and the snarly, but lovable, Adam who wants her.

So, if you haven't picked up your copy of Big Bad Bite yet, then go get it today!” 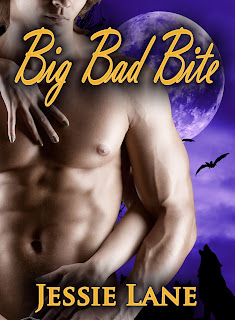 What would it be like to live in a world where you are considered abnormal to those who are above the norm?

Jenna O’ Conner has been taught her whole life to hide from everyone. Never to let anyone to close enough to know that she would prefer a shotgun for her birthday over of a bouquet of roses. She’s been smothered by her over protective family so that no one learns what she truly is. Which is not human. Nor, is she considered the norm for the supernatural Other community that is benevolent enough to share this world with the humans.
In a desperate attempt to live her own life away from the small town she was raised in, Jenna obtains her dream job as the newest member on the Wilmington Police Department’s SWAT Team. What she didn’t predict was that she would run into trouble her first day on the job, in the form of a deadly, mouthwatering man named Adam McPhee. Who is also not human, but more like a wolf walking around in human skin. He’s determined to figure out exactly what Jenna is, which unbeknownst to him, could very well put her life in danger. He’s also determined to have her all to himself.
As if that wasn’t enough for Jenna to deal with, bad news blows into town. A group of extremist Shifters who think humans are cattle and factions of Others worldwide should stay within their own species - never to intermingle. Chaos ensues. Jenna has to find a way to shut them down, but in the process of trying to do that, discovers things about herself that even she never thought was possible.

Who said the wolf was what you had to worry about?
Welcome to the real world.

Excerpt:
Hanging up with Kent, Jenna looks over to her Uncle. “We’ve got at least an hour to waste. How about you explain this Pack Master thing to me.”
Uncle Owen cocks his head to the side, considering her, and then asks, “What is it that you want to know about being Pack Master?”
“What is a Pack Master? What does you being the Pack Master mean and how did you become it? Is it because my father was the Pack Master and you’re related to him?”
A smug smile crosses his face. “There is one Pack Master for almost every continent. A Pack Master is the top Alpha Wolf for that continent and runs the entire area as his territory. So, for example, Adam is the Alpha of North Carolina, his job is to promote peace, make sure all of the wolves in his area are taken care of, and dispense discipline as well as justice if it’s needed. Him being Alpha is a position he earned by being the strongest wolf in the state and having the willingness to fight and kill any other wolf that wishes to challenge him to prove it. Although strong Alpha genetics do run in a family, it does not guarantee you an Alpha position if you’re related to one. I am not Pack Master because your father was and I’m his brother. Your father was the Pack Master because he was the biggest, baddest Wolf in this country. When he was killed I had to publically stake my claim in the title with anyone else who wanted the position, and then we were paired off in fights in front of anyone of our kind who wanted to watch, to the death. Like MacLeod in the Highlander, there could be only one. I inherited the Pack Master title because I’m the biggest, baddest motherfucker in the United States and I’m willing to kill anyone who challenges me mercilessly to prove it.”
Jenna blinks back at her Uncle in a small state of shock. “So you’re telling me that you became Pack Master because of your willingness to be a killer?”
He shakes his head. “No, I’m telling you that I’m Pack Master because I have a number of qualities that allow me to lead our people. Intelligence, strength, and when needed, a head for politics. I also have to be willing to kill anyone stupid enough to challenge me for the position. It’s out of necessity I assure you, not pleasure. Thankfully, the majority of my wolves are smart enough to know they wouldn’t stand a chance against me.”
“So what are you, like the wolf shifter version of the Terminator? Unstoppable and un-killable?”
His smug grin expands and turns into something that resembles a deadly shark like smile. “No, you could say I’m more like the Borg. Everyone will assimilate and resistance is futile.”
Jenna snorts. She should have known that she would be related to lethal geeks. God forbid she actually be related to anybody with any normal tendencies. That might be asking any higher powers for more than they can handle.
announcement