Running Against Traffic by Gaelen VanderBergh 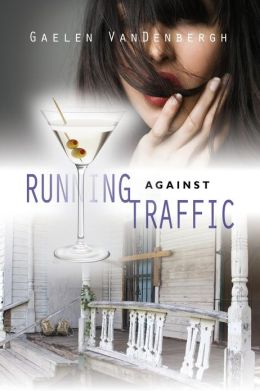 Paige Scott is done in. Done for. Done with it. Having spent her childhood shuffled between relatives who ignored her, and her adult life hiding within the walls of her relationships with men, she is prepared to live out her empty days in her crumbling marriage to David Davenport. David has other plans, however, and flings her into a remote, impoverished world, in stark contrast to the wealthy cosmopolitan one that was all she knew. Here she is forced to face the betrayals of her past and learn, for the first time, how to care for herself, and for others.

Hilarity and tragedy, addictions, unexpected friendships, and Paige's discovery of running and the relief it brings propel her on her journey toward the mending of a broken spirit, and learning how to truly live. Step by step, mile by mile.

Running Against Traffic is a small town novel about finding yourself when you have been living life going through the motions. Paige Davenport had it all on the outside, the rich husband, the parties, the idle lifestyle, but all that changes when she is dropped off to fend for herself at a dilapidated house in Wells Lake, a small town.

We follow Paige as she struggles to discover who she really is and what she wants out of life. The town is a big part of her discover as well as the colorful townsfolk and Paige soon realizes that she is not on her own in this new place. This book had moments that touched you with the beauty of the description as well as moments that were laugh out loud funny. Van Denbergh nails her descriptions of people and there are so many quirky characters that you fall in love with in this story.

This isn’t a big dramatic story, it’s like a small town, on the outside it appears that not much is going on, but within the framework there is certainly a lot of soul searching, questioning and growing as well as laughter and big topics to be tackled, like drug/alcohol addiction. And much like the colorful townsfolk this book will bring you into its pages and make you feel like one of the family.

My only criticisms of this book were that I wished I had known a bit more about Paige’s back story in her “old” life sooner in the book or more interspersed with the rest of thetale. There were a few mentions but we don’t find out much of the other story until a bit later in the book when old emails are revealed. I think I wanted to step into that world a bit more, to know a bit more about what was going on in her head at that time and maybe instead of just emails, I would liked to have“been” there with her.
Secondly, I loved Al, however I wish I knew more about him.  He is so mysterious! I thought hewould be revealed at the end and he was to an extent, but still I feel that much of him is hiding under the surface. I think I’ve read that there will be a second installment, so perhaps we’ll get to learn more about him and why he holds Paige at arm’s length.

Overall this was a great read. I was pulled in by the warmth of the story, the friendliness and just plain quirkiness of the town folk and I rooted for Paige to find herself and discover what she wants out of life. I think she did discover some things, but I feel there is more growing for her and I’d like to find out what happens next. Definitely a solid first book by Gaelen Van Denbergh.

I’ve also just published my own novel, oh about 2 weeks ago on Amazon.  A huge accomplishment for me!  Well, without further ado, let’s jump in some words, stories and emotions together!
4 stars adult thriller