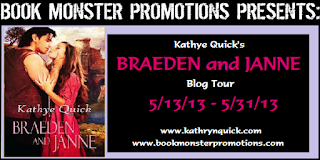 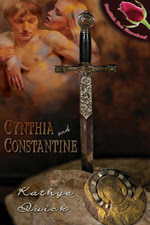 Available at : Amazon
Lady Cynthia of Abertaine is trapped. Not only has the man she is to marry, Sir William Leyborne, not been back to the castle for over ten years, but she’s also not a titled Lady. Lord Simon of Cowell, a renegade warlord aligned with Mordred against Arthur and his Knights, has declared himself sovereign over Leyborne Castle and everything that once belonged to Sir William - including Cynthia.

Sir Constantine, Knight of the Round Table, has come to the shire to give Cynthia the news that William has fallen in battle. With him is William’s oral will giving all he owns to Cynthia as though they had been wed. But when he finds the shire under the control of an evil warlord, he knows he cannot leave without first freeing Cynthia and driving Simon and his soldiers from the land.

Drawn together by an attraction older than time, Cynthia and Constantine soon discover that though a vow made by a knight’s honor has brought them together, it may just also cost them their lives.

YOU’RE EITHER GOING TO LOVE THIS OR YOU’RE GOING TO HATE THIS.
I know the tour is for Braeden and Janne, the second book in my Beyond Camelot-Brother Knights series, but the concept for Cynthia and Constantine, Book One, sprang up during a season of American Idol.
I work for county government and we have several satellite offices around the county.  Once a month seven of us get together to have lunch.  We call it the Lusty Ladies Lunch Group.  Other times we keep in touch via email.
During this particular season, Bo Bike and Constantine Margulies were competing.  Two of the Lustiest choose these guys as their favorites.  While we didn’t agree on who should win that season, we did all agree that they had ‘romance book cover’ hair; the long and flowing kind of hair usually depicted on Knights in Shinning Armor on historical romances.

After one particularly hot and heavy day of emailing (after our constituents were served, of course) I went home and wrote a small piece about a knight meeting his ladylove.  The next day I sent it off to the Lustiest and got requests for more.  Well one thing lead to another and I began to serialize a story about Bo and Constantine as knights in the Arthurian days.    I named my hero Constantine and his lady was Cynthia, one of the Lustiest.  I gave Sir Constantine a brother, Sir Braeden and named his lady, Jane, another Lustier.  The story just evolved on a weekly basis with email scenes going back and forth until I had 100 pages.
I thought that was the end of the adventure until I decided to flesh out Constantine and Cynthia’s story and turn it into a 55,000-word book.  I was fortunate enough to have the Wild Rose Press expressed interest in the novel and then publish it.  And yes, you’ll either love this or hate this, but the antagonist of that story is named after one of the American Idol Judges.  I’m sure you can guess which.  Jane and Braeden became integral characters in Cynthia and Constantine and demanded their own book.
The moral of this  post is that you never know when or where inspiration is going to sneak up and bop you on the side of your head.    In my case it was with a microphone on Fox-TV. 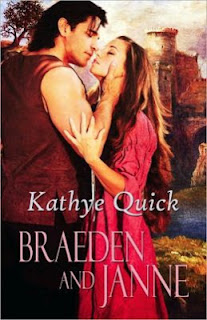 
Duty and desire clash to save a new Camelot from the sons of Mordred.

After his brother is made king by a dying Arthur, Braeden hopes to help rebuild Camelot and carry on Arthur's vision for the kingdom. Together with the new queen, and her companion Janne, a new era begins.

Although the ways of Merlin and Morganna are banned from court, Janne holds to the goddess. She finds the mind overrules the heart as passion explodes each time she and Braeden are together.

With the sons of Mordred, plotting the ultimate revenge…brother versus brother…there is no peace to be had in Camelot. When Janne is exposed as a Druidess, she and Braeden must find a way to expose the plot to take down Camelot while maintaining the ideals the majestic realm was built upon.

Adventure and romance clash in this unforgettable story of love and duty.

I loved the beautiful descriptions and how they made you feel as if you were right there with the characters. The plot was fast paced and full of surprises. The way magic was blended into this historical setting was perfect and only added to the fairytale like feel to this story.

Janne is a beautiful and caring woman. She is also stubborn, especially when it comes to Braeden. I really enjoyed getting to know her and see how she handled her magic and the fact that it isn't as widely accepted as it used to be.

Braeden is a noble, strong, and courageous man. He was a great partner for Janne even when they didn't exactly see eye to eye. The banter between these two was so much fun and you could really tell how much they cared for one another.

The romance in the story was sweet and well paced. Giving us time to get to know the characters and for them to get to know and respect each other. I could really feel the chemistry between these two and felt that they would make it together no matter what the future held.

This is magical story that you will not be able to put down! 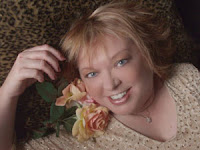 Born long ago in a place not so far away, Shenandoah, Pennsylvania, Kathryn Quick has been writing since the Sisters in St. Casmir’s Grammar School gave her the ruled yellow paper and a number two pencil. She writes contemporary and career romances, romantic comedies, historical romances as well as urban fantasy.

She has been a member of New Jersey Romance Writers and Romance Writers of America since 1990 and considers it an honor to have been NJRW President in 1992 and 2001. She is one of the founding members of Liberty States Fiction Writers, a multi-genre writers’ organizations dedicated to furthering the craft of writing and helping aspiring writers move onto publication.

Kathye originally wanted to be President of the United States or an Organic Chemist, but somehow life got in the way and she got married right out of high school and had a set of twins two years later. The Presidency seemed out of reach and night school to get her Ph.D. to create new molecule that would ultimately result in the betterment of humankind seemed a little time consuming while trying to raise twins, so she decided to write instead.

In her "other" life, Kathye is married to her real-life hero Donald and has three grown sons all having adventures of their own and three “bonus” grandchildren. She is a die-hard New Jersey Devils fan and works for Somerset County government (as close as she could get to the White House) and is plotting a novel about a new molecule that will ultimately result in the betterment of humankind.


Kathye is giving away the following prizes on her tour:

Grand Prize: Kobo mini E-reader (US ONLY). International winner will get a gift card