After the Fear by Rosanne Rivers 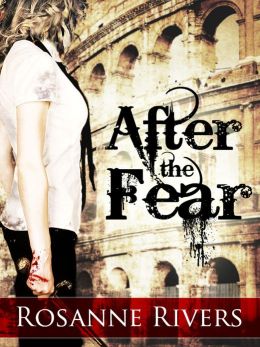 You have not attended a Demonstration this month. In Sola’s city, everyone obeys the rules. Stay away from the trigger cameras and regularly update your Debtbook, and you just might survive. But having to watch the way criminals are dealt with—murdered by Demonstrators in the Stadium—is a law Sola tries to avoid. When a charming Demonstrator kisses her at a party, however, she’s thrust into the Stadium and forced into the very role she despises. Armed with only natural resourcefulness and a caring nature, Sola narrowly survives her first bout. Her small success means she’s whisked off to a training camp, where she discovers a world beyond the trigger cameras and monitoring—a world where falling in love with a killer doesn’t seem so terrible. Yet life as a Demonstrator has no peace. Sola must train her way through twenty-five more Demonstrations before she can return home to her father. At the end of each battle, only one survivor remains. Sola could face anyone in the Stadium . . . even a loved one.

My Thoughts
A Gripping Read!

This story is fast paced and full of action and romance. It was written very well with beautiful imagery that really made you feel as if you were there with Sola. I also enjoyed how the story made you think and stayed with me long after I turned the last page.

The world building was excellent. I had a great time getting lost in this dystopian reality. I would love to see another book based on Sola’s world.

Sola’s is a strong willed girl that I really admired. She is put through a lot both physically and emotionally, but she never gives up. I liked that although she was strong she had a caring side and truly wished to help others.  She was a fun character to get to know.

There were also a lot of memorable side characters as well including Dylan the demonstrator who Sola was intrigued by. He was an interesting character and I liked that he wasn’t necessarily bad or good.

The premise of the book was both intriguing and exciting I couldn’t get enough of it and Sola was and is one of my all time favorite heroines with her caring nature and strong heart she is a character you will never forget.

This is an exciting new novel that I highly recommend especially to those who love tons of action mixed with romance!
5 stars action dystopian romance thriller ya