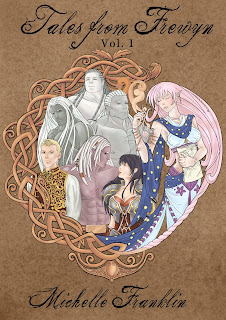 The Haanta Series is the longest, ongoing, online romantic fantasy series. Thousands of readers visit the world of the Two Continents to enjoy the daily short stories featuring all their favorite characters from the Haanta Series novels. In between the business of the books, the commander, Rautu, Otenohi, Unghaahi, Leraa, Kai Linaa and Alasdair enjoy some time together in Diras Castle, but as the stories portray, mischief lies in every corner of the keep where spiders, chocolate pies, petulant giants and grouchy cooks abound.


From the short story “The Five-Second Rule”

One second passed. The chocolate remained on the ground, and his heart was racked with sadness. Should he suffer to leave it alone and allow time to decide its fate, or should he stoop and salvage the lonely piece? He might use it as a ruse, he might replace it on the table and wait until Martje were by and have all the joy in watching her eat something that had been sullied by her own floor, but he should never allow the abdominous cook to touch what had been sent for him, regardless of its being dirt-ridden and rejected. Had it been white chocolate or even milk chocolate, he might have consented to leave it where it was, but dark chocolate, regardless of quality, must never be left to one who could not appreciate it with tolerable delectation.

Two seconds were gone, the chocolate was still on the ground, and the giant was still looming over it, his mind slowly conceding to try the Frewyn custom. He began considering and humphing over all the minutiae in the question: had the floor been cleaned lately, had anyone entered the kitchen from the yard, had the larder been swept, were there remnants of soapwort or soda on the ground?

Three seconds, and the giant's resolve was faltering.

Four seconds. He must retrieve his precious piece whether he would eat it or no. Martje would soon be along to sweep the ovens and prepare the bread, and as he had seen her bend down for a few fallen crumbs of muffin or a half a slice of toast, she should certainly exert herself for a piece of Tyfferim Dark. Never should he relinquish what was rightfully his to her, and at last he resigned himself to the notion that even if he should decide not to eat it, at least it would never find its way to Martje's plump hands.

Five seconds. His captiousness was lain aside, and he was decided. He bent and took up the piece from the ground. The chocolate had been salvaged, his disquiet was assuaged, and all his equanimity was returning. It was relief overpowering, and seeing that the piece bore no tarnishing made him consider whether the once-fallen piece might not be eaten at last. He examined it from all sides, deemed it in tolerable order, and as he inhaled and prepared to grant it an inaugural huff, Boudicca entered the kitchen, and what was her astonishment upon finding her mate blowing on a small sliver of chocolate.

"Iimon Ghaala," she exclaimed, "you cannot have just picked that up from the ground."

The giant looked about, ashamed of his conduct. "Perhaps," he murmured, turning aside.

"Never did I think I should see you stoop to such base tactics, but I daresay the chocolate should never have forgiven you had you left it on the ground."

The giant gave her a flat look.

"Well," said she, the first thrill of horror over with her, "I do hope you blew on it within the recommended five seconds."

The giant glanced at the piece in his hand and seemed bemused. "I reclaimed it within five seconds."

"And you waited until the sixth to blow on it? You're taking your chances there, Iimon Ghaala."

He sighed and gave the piece of chocolate a longing look. It could not be left to welter in uncertainty. A half a second should make little difference in the case, and once he had bid his mate to give his treat one last assessment and had received her sanction, all was amended, and the chocolate, which had nearly succumbed to ruination, might now be eaten. He smiled at his chocolate, and his smiles grew broader as he relinquished all remaining apprehension and gloried in the fallen piece.

"I thought your scripture says that your people are not permitted to eat from the ground because of the various diseases caused by doing so," said the commander, suppressing a smirk.

"There are exceptions," he firmly asserted.

"And I suppose chocolate is one of them?"

The giant pursed his lips and glared at his mate. "It is, woman," was the final word on the subject, and the Den Asaan took his parcel from the table and returned to the commons, rejoicing in his conquest, pleased that he had discovered so useful a custom, and while he should never agree to eat something that had fallen in the dirt, the notion of the kitchen floor now being considered as safe ground was a decided comfort.

About the Author
Michelle Franklin is a small woman of moderate consequence who writes many, many books about giants, romance, and chocolate.