Top Ten Tuesday: Top Ten Book at the Top of My Summer TBR 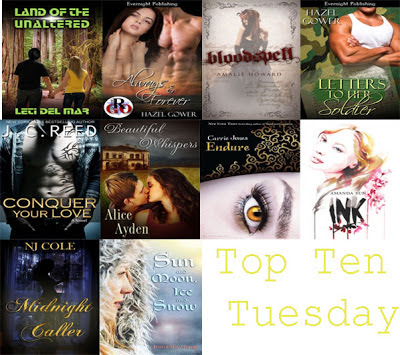 Top Ten Tuesday is a weekly event hosted at The Broke and the Bookish.

This week’s topic:
Top Ten Books at the Top of My Summer TBR

Zara is at the center of an impending apocalypse. True, she’s successfully rescued Nick from Valhalla, but it simply isn’t enough. Evil pixies are ravaging Bedford, and they need much more than one great warrior; they need an army. Zara isn’t sure what her role is anymore. She’s not just fighting for her friends; she’s also a pixie queen. And to align her team of pixies with the humans she loves will be one of her greatest battles yet. Especially since she can’t even reconcile her growing feelings for her pixie king . . .

On the heels of a family tragedy, Katie Greene must move halfway across the world. Stuck with her aunt in Shizuoka, Japan, Katie feels lost. Alone. She doesn't know the language, she can barely hold a pair of chopsticks and she can't seem to get the hang of taking her shoes off whenever she enters a building.
When Katie meets aloof but gorgeous Tomohiro, the star of the school's kendo team, she is intrigued by him…and a little scared. His tough attitude seems meant to keep her at a distance, and when they're near each other, strange things happen. Pens explode. Ink drips from nowhere. And unless Katie is seeing things, drawings come to life.
Somehow Tomo is connected to the kami, powerful ancient beings who once ruled Japan—and as feelings develop between Katie and Tomo, things begin to spiral out of control. The wrong people are starting to ask questions, and if they discover the truth, no one will be safe.

The spell was simple...

Cruentus Protectum (Defend the Blood)
But what do you do if your blood is your enemy?
Victoria Warrick has always known she was different. An outcast at school, she is no stranger to adversity. But when she receives an old journal for her seventeenth birthday, nothing prepares her for the dark secrets it holds -- much less one that reveals she's a witch with unimaginable power.
What's more, when she meets the dazzling but enigmatic Christian Devereux, she has no idea how much her life is about to change. Enemies will hunt her. Friends will turn on her. The terrible curse that makes her blood run black will stop at nothing to control her. And Christian has a sinister secret of his own...
Without knowing whom to trust, can Victoria survive her blood's deadly desires? Or will she lose everything, including herself?
Beautiful Whispers by Alice Ayden

There's an instant attraction between a girl from one of Virginia's oldest families and a maid's son, but secrets and dangers lurk in places no one expects.

Twenty-one year old Jane begins her day like any other. She lives on a gorgeous Virginia Plantation and carefully avoids any type of responsibility. Everyone assumes she'll marry her rich, childhood sweetheart until she meets handyman Alexander. With Alexander's encouragement, Jane begins to take on her family's responsibilities but quickly starts remembering pieces of her forgotten past. Why does she have unexplained scars? Why is she suddenly afraid of everything? And why won't her family tell her the truth? Alexander swears he won't push Jane too far too soon, but he only knows half the story. Secrets and dangers lurk in places no one expects, and - the bigger the house - the more places there are to hide.
Letters to Her Soldier by Hazel Gower

Can you fall in love with someone through their letters?

Bianca Gardiner’s best friend Greta asks her to write a letter to her brother on the front line, she just never expected a response. Yet Caleb asks for more. Bianca uses the letters as a confession each week, pouring out her soul and divulging information she normally wouldn’t share with anyone.

Warrant Officer, Caleb Sutten fell in love with Bianca through the letters she sent him over five years. Each sweet word helped to keep him sane. But every time he comes home for leave, Bianca goes into hiding.

From the moment they’re together, their passion ignites. Caleb will stop at nothing to pull her out of the dark and put her into his arms, where she belongs.
Always and Forever by Hazel Gower

Romance on the Go

Sabina's crush on Shaun, her father's friend and work colleague, began the first day she saw him. Because of a twelve year age gap, and Shaun's liking for skinny, tall, gorgeous blondes, Sabina knows that Shaun is way out of her league. But she can still yearn.

A man can only avoid his attraction to a woman for so long before he has to do something about it. Shaun has decided that five years is long enough...even if Sabina's the boss's daughter.

The chemistry between them is explosive, but can they both admit their feelings and get their happily ever after?
Land of the Unaltered by Leti Del Mar

Rose comes from the capital of the Confederation of Cities where its citizens live in luxury and the greatest fashion statement of all is being Altered. People change everything about the way they look as often as they do their hairstyle but Rose is different. Her position of privilege has made her an outcast and led her to suspect that something sinister is happening to the citizens and flees the capital along with a past that imprisons her in search of a fresh start in the Land of the Unaltered.

Flynn lives in the Land of the Unaltered and hates the capitol and everything it stands for. So when a spoiled capital girl is assigned to work with him, he wants nothing to do with her and is prepared to make her life miserable. But Flynn was not prepared for someone like Rose. She doesn’t fit the mold he expected and finds himself strongly attracted to her. As she continues to surprise and outwit him, they begin to forge a bond that is tested when they discover a secret that could change everything they know about Land of the Unaltered.
Conquer Your Love by J.C. Reed
Meeting Jett was like bad luck. Dangerous. Unpredictable. And better avoided. In his game, the stakes are high. But are they worth the risk?

Brooke Stewart, a realtor in New York, finds forgetting is hard, but forgiving is harder. When the man she trusted, betrayed her, the only way to forget is to move on. Brooke is determined to start a new life, until she meets him again: the green-eyed, sexy as sin, six foot two sex god. The man who played dirty. The man who played her.

Sexy, rich, and arrogant Jett Mayfield knows he has made mistakes. He could have any other woman, and yet it’s Brooke he wants. When second chances collide with secrets and Brooke is threatened by the past, Jett is determined to protect her. She accepts his help unwillingly because she needs him but she wants to play his game on her own terms. And she has no intention to forgive or let him back into her bed.

When the man she is supposed to hate is the one she should trust, will he conquer her…or lose her forever?

A woman who can’t forgive.
A man who has made mistakes.
Two lives that are about to cross again and more secrets laid bare.

Rebecca Summers enjoys pleasing herself with the curtains open. That is, until a mysterious man calls to tell her that he is watching. Her fantasy becomes reality as she begins to perform for this stranger, following his instructions over the phone while he watches from afar. Rebecca’s world is turned upside down when finally they meet and she enters into a D/s relationship with her Midnight Caller.

Sun and Moon, Ice and Snow by Jessica Day George

Blessed—or cursed—with an ability to understand animals, the Lass (as she’s known to her family) has always been an oddball. And when an isbjorn (polar bear) seeks her out, and promises that her family will become rich if only the Lass will accompany him to his castle, she doesn’t hesitate. But the bear is not what he seems, nor is his castle, which is made of ice and inhabited by a silent staff of servents. Only a grueling journey on the backs of the four winds will reveal the truth: the bear is really a prince who’s been enchanted by a troll queen, and the Lass must come up with a way to free him before he’s forced to marry a troll princess.