Dawn Summers is dying. It’s 1853 and as the seventeen year old continues to fade away she has visions of the father she never knew, urging her to fight for her life.

In the small village of Fandova the only medical care is in the form of the mysterious Dr. Moralus who has a known penchant for bloodletting. Thomas, Dawn's fiancé, is warned against inviting his intervention, but feels he has no choice, he pleads with the doctor to save Dawn’s life…whatever it takes.

Whatever it ‘takes’ has some consequences neither of them expected. Now, it’s a hunt to the death, with both Dawn and Thomas determined to win.

Sometimes you have to fight for the things that matter most.

An exciting adventure that you won't be able to put down! The story had me riveted from the very beginning with the beautiful imagery and charismatic characters. There was always a bit of mystery shrouding the characters in the beginning and I had a great time figuring everyone out. The mystery and action were well done and had me on the edge of my seat in anticipation of the next turn of the page.

Dawn is a strong and courageous girl who I really admired. She had some tough decision to deal with in the course of the book and even when she wasn't sure of herself she still kept on going, which took a lot of courage. I also really liked that no matter what bad things were thrown at her she never really lost her sweetness. She was still a kind and caring woman who would do anything to help those she loved.

I also liked how the villains of the story weren't just plain evil for no reason. They had depth to them and their actions weren't always strictly black and white. It mad the story that much more interesting.

Ryan is a sweet man and I adored him. He wasn't always sure of himself, but he did his best to be good and help Dawn.

The romance was sweet and not rushed at all. I really liked how the romance developed slowly and how these two characters interacted with one another. I hope to see more of them in future books.

For an exciting and romantic adventure check out Sunkissed by Carys Jones! 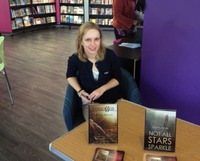 Carys Jones was born in Shropshire, England. She displayed a passion for writing from a young age, spending her time creating short stories and poems. Carys later went on to study Creative Writing at University level. Her first book, Not All Stars Sparkle, was released in October 2010 and was a finalist for The People's Book Prize 2013.