The Hero's Companion by Amy Lignor 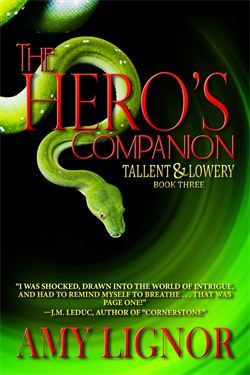 Leah Tallent and Gareth Lowery have seen it all. From walking the halls of an eerie house that held clues to one of the biggest puzzles in history; to going up against literal madmen in order to save a relic that could alter the world, the Tallent and Lowery team have had to utilize everything they had to survive.

Now . . . Leah’s father has gone missing. They have only seven days before he will be killed, and the only clue to follow is a picture of one of the most famous icons of all time. Heading to her hometown, Leah begins her search for anything that will point her in the right direction. But all she finds is a mother who has fallen apart, talking about things that Leah doesn’t understand. Discovering a strange map stuck to the bottom of her father’s desk, Leah and Gareth are joined by a young woman who has a secret all her own. Teaming up, the trio must solve this new mystery that will take them from the pinnacle of the Acropolis to the depths of Cleopatra’s caves in order to unmask the man who has a definite score to settle.

This frightening adversary will do his best to capture Leah and take her far away from the protection and love of Gareth. In a location that’s been buried under rock and dirt for centuries the battle will begin, and the team will have to face the one foe that will expose secrets and unleash unheard of power in order to get what he wants. As it was with the mighty Athena, Leah is seen as ‘The Hero’s Companion’—the one woman who will do anything to make sure the right side wins. But without Gareth, her time may just run out.

Discover the impossible with Leah and Gareth.

The author once again does an amazing job setting up the mysteries and leaving just enough hints and clues along the way to keep you guessing. I was enthralled by the exotic locations. I really enjoyed discovering new secrets along the way.

Most of all I enjoyed reading more about Leah and Gareth. Throughout the book we get to see as their relationship grows even further and even gets tested along the way. Everyone has secrets and Gareth's just may tear them apart.

I also really liked finding out more about Leah's father. They have a very interesting relationship and I really enjoyed seeing the different dynamics within it. Their interactions with one another were interesting as well and definitely brought out a lot of drama and turmoil.

New characters also brought a lot of drama as well. Especially, the new woman in the group. She is full of secrets and teaming up with her could either help them or destroy them.

Let us travel with Leah and Gareth on another fun filled adventure!

Now she is a published author of several works of fiction. The Billy the Kid historical The Heart of a Legend; the thriller, Mind Made; and the adventure novel, Tallent & Lowery 13.

She is also the owner of The Write Companion, a company that offers help and support to writers through a full range of editorial services from proofreading and copyediting to ghostwriting and research. As the daughter of a research librarian, she is also an active book reviewer.

Currently, she lives with her daughter, mother and a rambunctious German Shepherd named Reuben, in the beautiful state of New Mexico.