The Lions Embrace by Marie Laval 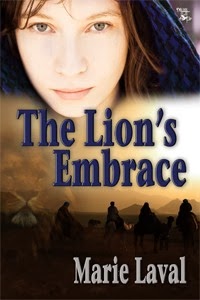 Arrogant, selfish and dangerous, Lucas Saintclair is everything Harriet Montague dislikes in a man. He is also the best guide in the whole of the Barbary States, the only man who can rescue her archaeologist father from the gang of Tuareg fighters that has kidnapped him. As Harriet embarks on a perilous journey across Algeria with Saintclair and Archibald Drake, her father's most trusted friend, she discovers a bewitching but brutal land where nothing is what it seems.

Who are these men intent on stealing her father's ransom? What was her father hoping to find in Tuareg queen Tin Hinan's tomb? Is Lucas Saintclair really as callous as he claims—or is he a man haunted by a past he cannot forgive?

Dangerous passions engulf Harriet's heart in the heat of the Sahara. Secrets of lost treasures, rebel fighters, and a sinister criminal brotherhood threaten her life and the life of the man she loves.

Does forever lie in the lion's embrace?

Things aren't always what they seem.

When her archaeologist father is kidnapped, Harriet must turn to the one man she despises the most, Lucas Saintclair. He is everything she hates in a man--arrogant, selfish, and dangerous. Unfortunately, he is also the best guide in the whole of Barbary States and the only one who can rescue her father from the gang of Tuareg fighters that kidnapped him.

As she begins her journey with Saintclair and Archibad Drake, her father's old friend, she discovers that not everything is as it seems in this dangerous land. Secrets of lost treasures, rebel fighters, and a sinister criminal brotherhood threaten her life and the life of the man she loves.

Exotic locations, steamy romance, intrigue, and tons of action. This story will have you on the edge of your seat and anxious for each turn of the page. The mystery was well done and the romance was perfectly paced. The author had some beautiful imagery that really made you feel as if you were a part of the book.

Harriet was a caring young woman who would do anything for her father. I really liked her spunk, especially when it came to Lucas. She may have been forced to deal with him, but she didn't have to take anything from him lying down. She was a really fun character to get to know.

Lucas was a bit arrogant at first. However, after a while, Harriet was able to break through his tough exterior and see the sweet man underneath. He has a tough past that has hardened him, but you can really see that he cares for Harriet.

Drake was a bit of a mystery and I never really knew where he stood, but he really added to the intrigue.

Jump into a whole new world of adventure in THE LION'S EMBRACE by Marie Laval!
5 stars adult contemporary romance