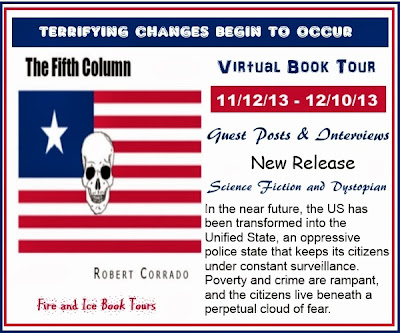 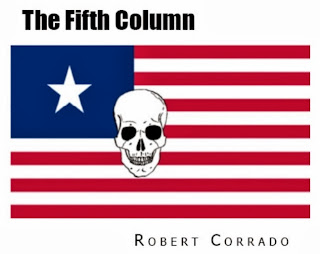 The Fifth Column by Robert Corrado

In the near future, the United States has been transformed into the Unified State, an oppressive police state that keeps its citizens under constant surveillance. Poverty and crime are rampant, and the citizens live beneath a perpetual cloud of fear. Pedro Pulido has never known his country to be any other way, but his grandfather remembers a time before, and he teaches Pedro to recognize the propaganda for what it is and to think for himself. Still, Pedro is no revolutionary.

Then Pedro’s quiet town is engulfed by the country’s growing anti-government insurgency, and terrifying changes begin to occur. A mechanical soldier with artificial intelligence, Samuel, is deployed in the neighborhood and, like others of its kind, is glorified by the government as a great protector of the people.

However, it quickly becomes apparent that Samuel isn’t just keeping an eye out for insurgents. After the death of one of Pedro’s closest friends at Samuel’s hands, Pedro finds himself faced with a decision. Does he accept the status-quo or seek justice for his friend’s murder?

Samuel sat motionless at the end of the cul-de-sac in the pouring rain. Or, seemingly motionless to the residents of Sanctuary Court, anyway. Currently, it had 12 uni-directional robotic ears trained with mathematical precision on strategic points within the neighborhood. Three other microphones were set to record all nearby ambient noise through a variety of filters for the sounds of electrical and mechanical tools, the spoken word, and even whispering. They could record the drop of a pin with crystal clarity from over 100 meters away. Samuel’s numerous optical lenses were trained similarly. In wide-angle they could snap to movement and then zoom in and follow. In tight-angle they could record in high-definition a portion of a citizen’s tattoo or birthmark and, even if it was half concealed, compare it against millions of others in the FBI, CIA, NSA, Homeland Security, and Civil Defense Intelligence databases. For all of its concealed functionality, it looked like its power switch had been shut off. Samuel observed the residents of the street peering out through their half-closed curtains and blinds or through front doorways held slightly ajar. The heavy rain pattered against its frame, and in the gray overcast day, it looked like something discarded.

Why Book Covers are So Important!  - Robert Corrado

As children perhaps one of your parents spouted off a line to you about judging a book by its cover.  If they were doing it right they were telling you not to.  I'm here to tell you that your parents were full of crap, well partially full of crap.  Kidding of course, most likely your parents were using a clever analogy about judging people by their looks or gettng you to at least try their disgusting looking spinach before saying you don't like it.  They probably were NOT talking about actual books!
I am talking about books.  What does the cover have to do with a book's content though?  Really very little, but the cover is important for a few key reasons.  A nice professional looking cover tells the potential reader something before they even pick up the book.  It tells them that you are proud of your work.  I'm speaking from a self-publishing standpoint of course because I've not been published traditionally but hopefully you take my meaning.  If you spend the time to find a good artist and have them do a very nice looking cover you are telling the reader something before they've even read the first word of the story.  You care about the presentation of your work.  This is a subtle message to the reader but important.  On a subconscious level they are more likely to pick it up and give it a chance because deep down they know that some care was taken in how the book is presented visually and leads to the assumption that if the author cares visually how their book is presented, they must also care about the story, the characters, the climax etc...
A book cover is important for providing your novel some wow factor when sitting next to other books on a shelf.  Think about color!  This may seem trivial but I designed a white cover for my book because I knew white would pop out distinctly if it were placed on a book store shelf.  All I seem to see are dark covers.  The art looks great but from more than five yards away the book shelf looks like a big black and gray blob... ah but LOOK!  There is that nice bright white book standing out from the pack!  What courage to deviate from the norm!  I must pick up this book and at least read the blurb or check out the front cover art.  Humans are visual creatures, don't ignore this simple fact.
Lastly, depending on your chosen audience, the book cover is almost a rite of passage.  Consumers of books have come to expect a certain level of quality in the books they buy.  This is why Smashwords has the premium catalog, why Barnes and Noble must approve books for shelf space from Indie Authors etc...  If you skimp on the cover for your book it may get glossed over by a potential buyer for this reason alone.  I know this sounds similar to point number one but I'm now talking about the veteran reader whereas above I was talking to perhaps the first time reader.  Veteran readers carry an expectation and to deliver any product below that expectation is courting disaster.
Thanks for reading my ramblings.  Remember, your storytelling will be what ultimately catches the fish, but the cover is the hook at the end of your line! 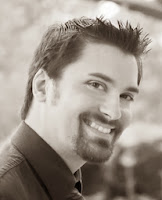 Robert Corrado grew up in a small town in the California foothills reading comic books and science fiction novels, muddling through pen and paper role-playing games, and filming amateur action shorts on his neighbor’s VHS camcorder. He currently resides in Denver Colorado.  He’s always been a big dreamer, starting his own business at the age of 21, and pursuing creative projects throughout his life in a variety of mediums.  He enjoys reading novels, watching films, skiing, dancing and karaoke with his wife Karen, and spending time with his Jack Russell Terrier, Joey. He has been writing creatively since grade school and shows no signs of stopping.  Some of his favorite books are 1984, Jennifer Government, and just about anything by Phillip K. Dick.  If he were standing in front of you or writing an about page for you he’d definitely thank you for taking the time to read something he wrote so…