Book Tour: Set My Soul On Fire by Celia ~ Excerpt ~ Author Interview (including a sneak peek of Celia's next project) !!! 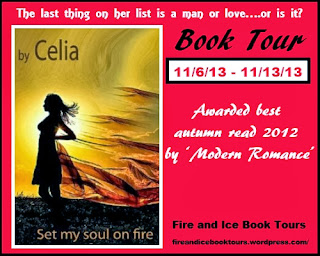 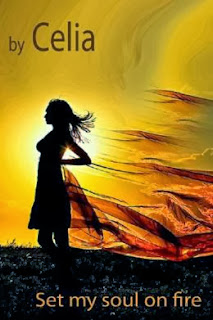 Divorced Francine was a naïve young virgin when she first met her ex-husband.  After a passionless, controlling marriage, where she lost her dreams and herself, she feels old and inadequate.  Concentrating on her future, she craves a different life that will make her feel alive and set her soul on fire.  Now free to pursue her dreams, a challenging idea emerges and an unexpected change of fortune takes her into a new world, where the last thing on her list is a man or love….or is it?

1.      How will you describe your book within a sentence?

·         It is about a woman who seeks an adventure, which gradually changes her views and herself towards love, romance and sex.

·         My heroine; Francine.  I admire her for finding the courage to change her life and follow her dream, mostly through her own cleverness and strength, which she did not know she possessed.

3.      Your least favourite character from your book and why?

4.      If you get a chance of living the life of one of the characters of your book then which one would it be?

·         I never plan, I roughly have an idea of the beginning and the end, and then the characters take over.   You have to love your characters; even the horrible or wicked and I get so involved with them that they do the story themselves.  I use to think this was a little nuts, but since then I have talked to many writers who say the same.  Maybe we are all nuts!

7.      Tell us about your inspiration and how it motivated you to become a writer?

·         I have always loved books and writing stories, since a kid.  My English teacher always rated my essays, it seemed it was the only thing I was good at. My parents never encouraged me and I had to leave school at 15.  My father did not believe in ‘educating woman’ and I felt quite stupid.   I went back to evening school after I was married and then worked in schools and special children’s units.  As I grew older I again went back to part time education and eventually lectured in colleges.  When I became very ill and landed up in a wheelchair for several years I began to write and actually finish a story, the first time since childhood. I had grand children by then and having worked for so long with kids I started writing for children. However I had many romance books half written and decided to give one a go. I find it easier to write for adults then writing for children, because you do not have to worry about adults morals or what the story may be teaching them.  I did wonder if I could write sexy scenes, but once I started I found it quite fun.  The hard bit was trying to make the scenes different, which I hope I have done.

8.      How do you feel now that you’re a published writer? Are you satisfied with your achievement?

·         I’m not sure about satisfied but I feel proud, mostly because the people who have read Set my soul on fire said it was beautifully written.  I feel very chuffed about this as my spelling and sentence structure is awful…but improving, obviously with my writing skills.

9.      Do you prefer self-publishing or the traditional form of publishing?

11.  Any secret or fact about you that will surprise your readers and others as well?

12.  Three most important things that an amateur writer must keep in mind while writing his first book.

·         To just write the story, don’t worry about HOW to write, get it down on paper.  Then go back and add and edit it.  When you are satisfied, find a good editor and follow their suggestions etc.
·         I was once told NOT to write so many different words to describe someone speaking. i.e, he gulped, she whispered etc, because often ‘said’ is better and simpler because the reader apparently does not ‘read’ said and can immerse their self in the dialogue! I don’t know if this is true but I do try to follow this rule.
·         Use as many of the five senses as possible on most pages.

13.  How do you spend your leisure time except for writing? Are you into sports?

·         I look after my super grand children, go out to dinner, go to the theatre, I love driving and travel. Unfortunately the only sport I can do is swimming as my illness, Fibromyalgia, stops me from to much physical sport.

14.  Your favourite vacation destination? Had it ever became the place where you based any of yours book? If yes, then which one?

·         I adore the Caribbean islands and the people, I have not set a story there yet!  What a great thought.

15.  Are you currently working on a project? If yes, would you like your readers to have a sneak peek into it?

·         Yes, I am writing a very different romance about how people caught up in a war and experience the worse of humanity can ever love again.  Here is the first couple of pages,,,and I am not sure of the title yet.

On the third day after Daniel’s arrival, nurse Shani wandered into Daniel’s small bedroom.  She was a tall willowy woman, only a few inches smaller than Daniels six feet.  Her blue uniform looked clean and crisp against her polished black skin with no sign of perspiration.  Daniel wondered how she remained so cool.  You would have thought some of his ancestor’s African blood might have kept his body temperature bearable.  He had been laying full length on the bed his door wide open and the small window opposite pushed open to the limit.  The breeze flowing from the door to the window seemed to curl round the room, but miss him.  He had even moved the bed between the door and the window hoping to feel some relief.
“Sorry to disturb you,” Shani grinned, her white teeth radiant in her lovely oval black face.  “The girl has spoken at last.  I thought you would like to know.  And the old lady, Lilly May, has died peacefully.”
With an effort of weariness, Daniel sat up feeling embarrassed at being found half naked on his bed.  “I knew it would be soon for Lilly May, I’m sorry.” He paused thoughtfully. “What did the girl say?”
“Her name is Anneze and she is twelve years old.”
“Twelve,” Daniel echoed.  “And already had a child.”
Shani smiled and softly said, “I was only eleven when I had my first daughter and she was coming up to twelve when she had Jobi, my grandson that lives with me here.  I was a grandmother by the time I was twenty-two.  My father gave me to my husband when I was nine and my husband gave my daughter to her husband at ten.  It is the way and not uncommon here.”
“I didn’t realize…you have a grandson here.”
“Yes, my daughter was very sick after her husband’s village was raided.  They killed her husband and chopped off my daughter’s hands and Jobi’s left hand.  Unfortunately, my daughter got an infection and never really had time to recover before the rebels came to our village; she was too weak to flee.  She begged me to take Jobi and I fled with him and my two sons.  However, Jobi was still ill from his hand being cut off and he would have slowed my sons down, they went on to the border with some friends to escape being forced to fight.  It was two years ago, I have not heard anything about my boys but I pray that they are safe somewhere.  I came here to the centre with Jobi and we have been here ever since.”
“And your husband?”
Pain swept across Shani’s face and tears swelled in her eyes, “He was a good man, and husband he allowed us to escape while he stayed with my daughter and fought of the men trying to follow us.  Another woman, from my village that had hidden herself, told me that he fought bravely, he had killed my daughter before they hacked him to death.  Then although my daughter was dead they pulled her out of our hut and threw her warm body on the grass and then raped her dead body, before they mutilated her”
Daniel felt vomit swim in his throat, but he managed to utter, “You are so brave Shani.  I can’t comprehend how you manage to seem so happy.”
Shani chuckled.  “I am happy because I have Jobi, good food and a comfy bed.  I am not brave; you have no option about these things.  I mostly carry the pain of the past inside me, occasionally it screams out.  It is life here; Africa is full of violence and disharmony.  Our history is about tribal warfare.  We live with what we live with.”
And Daniel thought he had bad memories……..
16.  Your top three favourite authors?

17.  Any suggestions or advice for the upcoming writers on editing and publishing their books?

·         Make sure the editor is recommended to you by joining a writers club as the first one I employed was only a little better than myself which lead to some bad comments about my book. 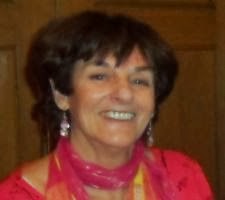 I am a retired child development lecturer and nursery nurse.  I live in Lincolnshire with my husband and near my two daughters and five grand children. Set my soul on fire, is my debut novel into adult stories; until now I have wrote mainly for children and young teenagers.
For more info on me please go to my website www.celia-romanceauthor.com  as it has an interview/and review of my story and me and gives an insight into both.