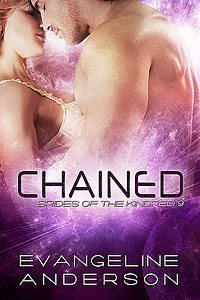 Goodreads:
Maggie Jordan is not supposed to be having adventures. Her mission is to go to Gaia, a new, unpopulated world, and study the native life forms there. So how come she finds herself in on the female dominated Yonnie Six instead, rescuing a huge, muscular prisoner? The same prisoner she keeps seeing over and over again in her dreams…

Korexiroth—or Kor, as Maggie dubs him, is a slave who spent his life fighting in the savage arenas of the Blood Circuit. He’s got plenty of kills under his belt and more than enough reasons to run as soon as he gets free. But somehow he can’t make himself part from the girl who was brave enough to save him from certain death.

Now Maggie and Kor are on the run together, trying desperately to find someone to remove the alien device that was implanted in Maggie as punishment for her thievery of an expensive slave. The device, or “slut button” as it is called, forces Maggie to sexual excesses the shy scientist has never known before—and Kor is the only one who can help her control her new urges.

Kor is more than willing to help Maggie satisfy her new sexual hunger but his own appetites are not so easily satiated. For there is a dark secret, a shadow from his past that stalks him and whispers of power beyond belief if only he will give himself over to darkness.

Will they find a way to return Maggie to normal? Will Kor admit how he really feels for her? Or with the shadow from his past succeed is tearing them apart?
Buy Links
Amazon - Smashwords

My Thoughts
﻿
Just when I thought it couldn't get any better, this happens!

This series never ceases to amaze me. In "Chained" we are introduced to a bit more of the Yonnie Six culture as well as a completely new and terrifying planet. The author has an amazing imagination and I always enjoy discovering new types of plants, creatures, an alien cuisine. As horrible as the customs of Yonnie Six can be it certainly brings up some interesting situations.

Maggie is such a sweet girl, but very brave as well. She cannot stand to see any kind of injustice, especially when someone is in pain. Although she was a very intelligent young woman, she was a bit clumsy. I really enjoyed getting to know more about her. She was definitely a character I would love to have as a friend. Her and Kor were so much fun and there was never a dull moment between the two.

Kor was arrogant and quick to anger, but also very loving and loyal to a fault. I lived getting to know him and found him to have a mischievous nature and sense of humor. He was also fiercely protective of those he loved.

Aside from these memorable characters I also enjoyed meeting two new ones if the twin kindred variety. They were really intriguing and have me already anxious and eager to read the next book in the kindred series!

Fans of the kindred series are in for a real treat with "Chained"!