Daughter of Sherwood by Laura Strickland 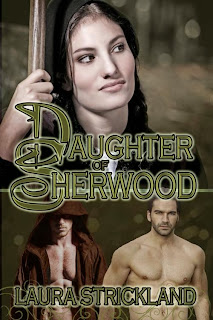 Raised as a scullery maid in Nottingham Castle, Wren has no idea she is the daughter of the legendary Robin Hood. When she is forced to defend herself against the unwanted advances of an influential man, she flees the castle and finds refuge in Sherwood Forest. It is then she learns a powerful secret: she has a destiny as a guardian of Sherwood, charged with the responsibility of defending its ancient magic.

Since Robin's death many years before, his supporters have kept his legend alive.  Now one of the three guardians holding the spell has died. With two young men, Sparrow and Martin, Wren must form a new bond strong enough to protect Sherwood and continue her father’s fight.  Drawn equally to Martin’s warrior spirit and Sparrow’s gentle strength, she finds it nearly impossible to choose between duty and love.

Laura takes us on a journey into the world of Robin Hood's daughter, where we experience her struggle to accept her identity and the demands of her father's legacy.  Along with Wren, we learn that what is loved in life can never be lost, and that great love is worth the price paid.  For at last, when Martin is captured and held at Nottingham Castle, the path becomes clear for Wren and she finds the strength to become the woman she was born to be, the Daughter of Sherwood.

Sometimes greatness is thrust upon us.

Wren never knew about her famous father until now nor could she imagine the adventure that awaits her. Full of magic, mystery, and intrigue this is a page turner you will not want to miss. The author did a great job of keeping with the original image of Robin Hood while adding her own unique spin to the tale. I had a great time reminiscing about old characters and meeting plenty of new ones along the way.

Wren is courageous, headstrong, and as beautiful as she is kind. I really admired in ability to take things in stride and her willingness to sacrifice for the good of everyone. She is a beautiful character both inside and out and someone I would love to have as a friend!

There are also two new characters that were both so fun to read about. The first is Martin who is a potential love interest. He is brave, strong, and charming. However, his motives are uncertain and he has many secrets that may or not be harmful to Wren.

The second, and my personal favorite, is Sparrow. He is the kind, thoughtful, and friend that Wren can turn to for anything. I loved reading about him and really enjoyed his sweet nature. He was also very brave and would do anything for Wren.

Romance wasn't the only thing on their minds however. There were still many dangers that Wren needed to face. The hardest part would be figuring out who was friend and who was foe.

For a romantic and heart pounding adventure check out the "Daughter of Sherwood".