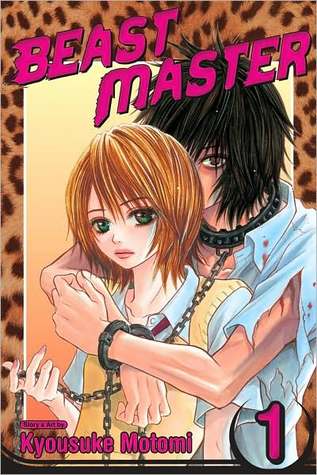 Reads R to L (Japanese Style). Taming a Beast was never this dangerous!

Leo Aoi looks like a crazy animal with wild eyes--and no one at his new high school will go near him! He does seem to have a special connection with animals though, which intrigues overzealous animal-lover Yuiko Kubozuka. In reality, Leo isn't as frightening as he appears, but Yuiko finds out that he goes berserk whenever he sees blood! Will Yuiko be able to get through to Leo during these violent fits? Or will Leo's ferocious side eventually devour her?

If a Hilarious romance is what you are after look no further than Beast Master!


This was a fun and lighthearted read and I loved how easy it was to get sucked into the story. It starts out in a school setting like many typical shoujo's, but as the series progresses the focus shifts to their meetings outside of school. This is when we start meeting more wacky characters and we also begin to find out a little bit more of Leo's backstory.


Yuiko is an kind hearted and otherwise normal teenage girl. The only exception is her almost over the top obsession with animals. She was a cute character and really fun to read about. I liked how the romance was nicely paced and not so insta lovish. Yuiko is a bit hesitant around Leo at first, but the more she learned about him the more she grew to love him.


Leo was my favorite character. He is fun, quirky, and his interactions with everyone are hilarious! His character was well thought out and the way he reacted to different situations was both comical and understandable seeing how he grew up. I also really liked getting to know the other people he met before Yuiko, even if they were a little weird.


This is a must read for any shoujo fan!
4 stars manga review romance shoujo