Blog Tour: Dreams of the Cursed by Allie Jean ~ Spotlight !!! 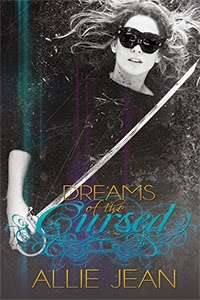 Synopsis:
A violent war has waged in secret underneath the notice of humanity since the beginning of time. Evil has pledged the destruction of humanity in spite of a power those that covet it could not possibly contain. Now the Warriors have inherited this ﬁght and are honor-bound to rid the world of this ancient malevolence. By guarding the most precious, piercing light they possess-their female kin known as the Oracles or Dreamers-the Warriors have a chance against the darkness. Chantal Breelan, plagued by horrific nightmares for most of her life, believes something is wrong with her. Why else would she have such visions of destruction? But when creatures of terror came crawling out of the shadows to hunt her down shortly after her eighteenth birthday, she discovers the truth. Her dreams become reality, throwing her headﬁrst into a battle wrought by cursed monsters, where death and torture lie at every turn. Mathias is a descendant of a Fallen Angel and a powerful Warrior. He vows his life in service to pay recompense for the sins of their fathers by guarding Chantal from within the shadows. Long has he fought, shedding sweat and blood, hoping that his struggles wouldn't be in vain. With Chantal's life in danger, he is forced to reveal himself, yet she manages to surprise him with her ﬁerce tenacity and strength. In his sacriﬁce, he ﬁnds redemption and life's ultimate reward-a love to surpass all time. Now Chantal has picks up the reins of her birthright and stands by her Warrior kin, by Mathias. She's on a mission to rescue others like herself. Yet, in this challenge, a battle of wits is exposed. New players are discovered, throwing strategies into question. When the truth comes to light, can Chantal hold her band of brothers together, or will they crumble under the weight of betrayal?

Allie Jean was born with an overactive imagination. She spent her childhood inventing stories and telling tales. Her mind never shut down, even while she slept. Vivid dreams containing extensive, elaborate plot lines of good overcoming evil villains captured her nightly visions, lingering into her waking hours and filling the pages of her well-loved bounded diaries. She was encouraged by her parents, even at a young age, to write down her tales, and it has remained a somewhat secret hobby. As a busy wife, mother and critical care nurse, Allie’s love of storytelling has been reborn through the adventures of her unforgettable characters.