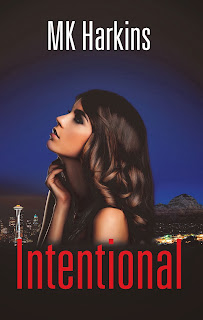 Links to the book: Amazon


What would you do in the face of the ultimate betrayal? This is the question that faces Mattie, Sarah, and Jeremy as they negotiate the often precarious game of love. In MK Harkins’s riveting debut novel, Intentional, nothing is ever quite as it seems at first glance. This story of bitter ends and new beginnings is told through the perspectives of all three of the main players, providing readers with a unique insight into the motivations and schemes of all involved.

Mattie and Jeremy are deliriously happy, engaged to be married, and looking forward to a lifetime of love. It all crumbles away, however, when Mattie comes across evidence of a massive betrayal. Unable to remain in the town that reminds her with every aching step of the love she lost, Mattie flees to Washington in an attempt to start a new life. There she meets Cade, a tattooed engineer by day and lead singer in a rock band by night. Their mutual attraction enflames Mattie, even as her heart still aches for her former fiancé. Just when it appears that Mattie may have found another stab at happiness, her past comes rushing back in the form of Jeremy himself. As events unfold, it becomes clear to Mattie that the trauma from her past may not have been quite what it seemed. Will Mattie ever learn the truth behind what really happened? And if she does, could it mean a new beginning with Jeremy, or will it be too late?

Jeremy “You’re not going to break my heart, are you?” Mattie “Please don’t make me”

Harkins: I like this quote because it shows Jeremy’s vulnerability, and Mattie’s reluctance to let him go.
___

“Hey, I’m Cade. Sam lets me borrow the cabin when I need to get away. I’m so sorry. I didn’t mean to interrupt your potential drowning.”

Mattie to Cade “So, you’re a good-looking guy. I’m sure you’ve had plenty of girlfriends. What happened in your life to prevent you from letting anyone get close?”

Harkins: I chose this quote to show that Cade isn’t all he seems at first look.  He’s protecting himself.
___

Harkins: This quote describes Mattie’s depth of her despair.

Cade “I’m in trouble.  I’m not going to be able to shake this one.”

Harkins: Uh ho – Cade might not be able to protect himself after all.

I have always been a voracious reader. After hitting
a dry spell of reading material, I decided to write the kind of book I would
like to read. This resulted in the creation of my debut novel, Intentional, with a sequel already in
the works.

When I’m not writing novels, I enjoy traveling the
world, rain, watching movies and cooking. I also run my own business in my
current hometown of Mercer Island, Washington.