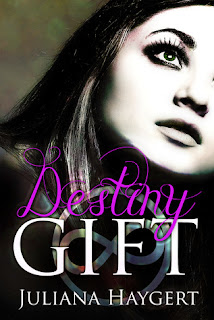 A student at the secured NYU, nineteen-year-old Nadine has visions of Victor Gianni, an imaginary guy she has real feelings for. Afraid of being truly insane, she explains the visions away as simple daydreams, but she can no longer deny them when she bumps into Victor in real life. But this Victor doesn’t know her, and turns her away. After the encounter, Nadine’s visions change to those of eerie fates, gods she’s never heard of, demons with sharp claws they are not too timid to use … and instructions.

To discover if she’s losing her mind, Nadine follows the vague directions—with the real, rude and reluctant Victor—leading to a man who knows it all: Nadine can restore an ancient creed by unveiling the clues on her visions, and bring sunlight and peace to the world again. But that’s only if the demons and the other evil forces behind the darkness don’t stop her first.

I got this book from the author, free of cost, in exchange of an honest review from my side.
Firstly I would like to thank the author for giving me this opportunity of reading and reviewing this book.
Well, to be honest I loved this book!!! Just loved it!!! This year I read another series with a resembling concept (The Book of Beings Series by Liz Seach) and maybe many of you have read that and if you haven’t then you should because it’s an awesome series. So when I started reading this book I thought that it would be a replica of Liz’s book but man oh man, this book just turned out to be awesome-sauce and knocked me over.
The world building is remarkable and the tango of mythology with the post-apocalyptic genre made me go swoon while I read this book. There is the perfect blend of mystery and paranormal romance and it made the read very interesting. The characters are well developed and I liked Nadine though her character had the potential of developing even more and hope to see that development in the sequel. I hated Victor at first because of his attitude and arrogance but later on I fell in love with him. Micah is sexy and hot and I just loved him from the very first. The supporting characters also had their own charm which increased the entertainment value of this read. The writing style of the author is so much comfortable that I just lost myself within the plot and got connected with the characters instantly.
There is action, mystery, the post-apocalyptic world has many surprises for the readers and you’ll be shocked on the revelations of the grave secrets. The concept of a girl seeing a boy in dreams then meeting him in reality interested me and the reason behind all of this kept me hooked in the story. A totally recommended read for ya all and hope that you guys will love it just like I did.


View all my reviews