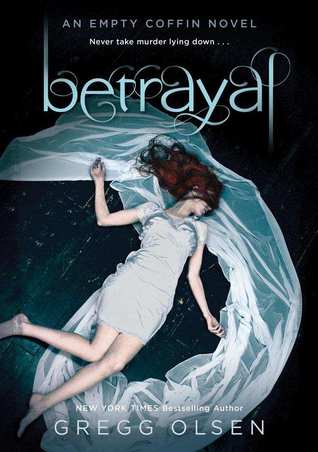 In this action-packed thriller sequel to Envy, foreign exchange student Olivia Grant is stabbed to death after a party--and the prime suspect is her best friend. As twins Hayley and Taylor Ryan get pulled into the aftermath of this Amanda Knox-like crime, they realize nothing is what it seems. Could it be betrayal of the ultimate kind?

Betrayal features real-life crime-solving techniques, heart-stopping suspense, plenty of red herrings, hard-hitting ethical questions, and information about the Amanda Knox case that inspired the novel. As the crime unravels, so does the twins' past…and they must face off against a family member who may unexpectedly have carried out the worst betrayal of all.


The twins are back and this time not only are they solving another murder, but discovering a possible betrayal that hits a little too close to home.

This action packed series always keeps you on your toes! The sequel is full of surprises and will keep you guessing right up to the last page. There are plenty of new mysteries and a few old ones that are being brought up in this book. I couldn’t put it down. It is fast paced, full of intrigue, suspense, and will leave you wanting more!

I love the relationship between Hayley and Taylor and how they get along so well. They are a great duo and hilarious whenever they are together. They do fight like sibling do sometimes, but over all they are loving sisters who stick together through thick and thin. As sisters they do have their secrets and it is their most dangerous secret that bands them together more than any other.

There are a lot of secrets being uncovered in this book and I was anxiously turning each page to find out what happened next. I can’t wait for another story with the twins and seeing what they may uncover next.

Check out Betrayal by Gregg Olsen for another look at the crime solving duo everyone loves!

About
Throughout his career, Gregg Olsen has demonstrated an ability to create a detailed narrative that offers readers fascinating insights into the lives of people caught in extraordinary circumstances.

In addition to television and radio appearances, the award-winning author has been featured in Redbook, USA Today, People, Salon magazine, Seattle Times, Los Angeles Times and the New York Post.

The Deep Dark was named Idaho Book of the Year by the ILA and Starvation Heights was honored by Washington’s Secretary of State for the book’s contribution to Washington state history and culture.

Olsen, a Seattle native, lives in Olalla, Washington with his wife, twin daughters, three chickens, Milo (an obedience school dropout cocker spaniel) and Suri (a mini dachshund so spoiled she wears a sweater)