I never believed in ghosts. Until one tried to kill me.

When Kennedy Waters finds her mother dead, her world begins to unravel. She doesn’t know that paranormal forces in a much darker world are the ones pulling the strings. Not until identical twins Jared and Lukas Lockhart break into Kennedy’s room and destroy a dangerous spirit sent to kill her. The brothers reveal that her mother was part of an ancient secret society responsible for protecting the world from a vengeful demon — a society whose five members were all murdered on the same night.

Now Kennedy has to take her mother’s place in the Legion if she wants to uncover the truth and stay alive. Along with new Legion members Priest and Alara, the teens race to find the only weapon that might be able to destroy the demon — battling the deadly spirits he controls every step of the way.

Suspense, romance, and the paranormal meet in this chilling urban fantasy, the first book in a new series from Kami Garcia, bestselling coauthor of the Beautiful Creatures novels.

A Ghost hunting thriller with a dash of romance!!

The writing flows nicely and right from the first sentence I was hooked. The pacing was also great. It wasn't too slow and always had you wondering what would happen next. Plenty of mysteries are wrapped up in this book as well. I really enjoyed learning about the paranormal world with Kennedy.

Kennedy is just your average girl who never even believed in ghosts until the night one killed her mother. Now she is thrust into the world of the paranormal where deadly secretes abound. However she is not alone. Kennedy meets some other ghost hunters that she must learn to work with. At first some aren't quite as welcoming as she'd hoped, but they soon become fast friends, all working together for a common cause.

Alara was one of my favorite secondary characters. She is a kick butt heroine who takes no prisoners. At first she seems a bit cold, but she has a big heart and once she gets to know you she is one of the best friends you could ever have.

The love interests Lucas and Jared were so much fun. I loved their interactions Kennedy. Lucas was the fun and easy going type who always knew how to make you feel better. Jared was a bit more moody, but when you really needed him he was always there. He takes too much blame upon himself which contributes to his somber mood, but on the occasion that he does open up he can light up a room.

If you are looking for a great paranormal romance with filled with intrigue, ghost hunting, and deadly secrets than look no further than "Unbreakable"! 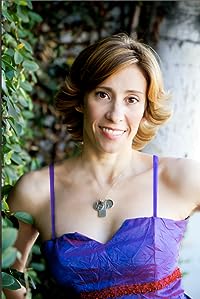 Kami is also the author of Unbreakable, the first book her solo series, THE LEGION (coming Fall 2013), which is currently being developed as a major motion picture.

Kami grew up outside of Washington DC, wore lots of black, and spent hours writing poetry in spiral notebooks. As a girl with Southern roots, she has always been fascinated by the paranormal and believes in lots of things "normal" people don't. She's very superstitious and would never sleep in a room with the number "13″ on the door. When she is not writing, Kami can usually be found watching disaster movies, listening to Soundgarden, or drinking Diet Coke.

Kami has an MA in education, and taught in the Washington DC area until she moved to Los Angeles, where she was a teacher & Reading Specialist for 14 years. In addition to teaching, Kami was a professional artist and led fantasy book groups for children and teens. She lives in Los Angeles with her husband, son, daughter, and their dogs Spike and Oz (named after characters from Buffy the Vampire Slayer).