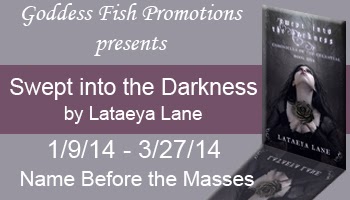 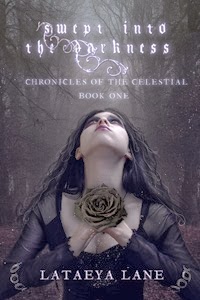 Swept into the Darkness: Chronicles of the Celestial Book One
by LaTaeya Lane

Sydney London is no ordinary twenty-four year old. Ever since she was a child she has had unique out of this world abilities. Suffering from a near death experience and surviving a deadly car crash Sydney is no stranger to death and loss. Cut off from the world around her she encounters an Angel and eventually falls for him inspired by deceitful magic.

Her one true love awaits in the shadows attempting to guard and protect her by risking his immortality. Traumatized by the murder of her best friend she sets off on an unspeakable journey to bring the dead back to life. Sydney's journey of self discovery opens her up to learn of her true angelic identity. She is led in the middle of an inter dimensional war among a hybrid breed of Angel Vampires and the Hierarchy of the Angelic clan. Will her unique powers and the love she bears for her guardian be enough for her to save the Earthly Realm or will she be Swept into the Darkness?


I got this book from the author, free of cost, in exchange of an honest review from my side.

Firstly I would like to thank the author and the publisher for giving me this opportunity of reading and reviewing this fabulous book.

I really enjoyed every bit of this story and it was really interesting from start to finish and I loved the little twists that the author introduced here and there. I also liked the smooth flow of the events that took place one after the other and the combination of thrill and adventure took my breath away.

I loved the writing style of the author very much and the dialogues were crisp and easy to grasp. The characters are fabulous and I loved each and every one of them. The ending was very well executed and the suspense gave me chills.

Over all a great read just I have a minor complaint that is the slow movement of the story at the beginning but later on it picked up the pace and flowed smoothly. Enjoy guys!!!

I would like to extend my sincere thanks for Curse of the Bibliophile for hosting this tour stop.  Your support is greatly appreciated.  I will not be able to comment during the day, because I work, but as soon as I get off, I will stop by.  Thanks again so very much. L.L

1.      How will you describe your book within a sentence?

Swept into the Darkness is an urban fantasy adventure that blends angels, vampires, Greek mythology, and biblical elements in a world where light and darkness struggle to fight for dominance.

2.      If you get a chance of living the life of one of the characters of your book then which one would it be?

If I had the chance to live the life of one of my characters, it would be my main character Sydney London.  Sydney is a beautiful young woman that has many different powers.  She has the power to travel through dimensions, and through time.  She is in love with a powerful angel and does things that the average person would dream of.

I love to read urban fantasy, and paranormal romance.  I also love to read books about the supernatural, and extra-terrestrials.  I write in the genre of fantasy.

I wanted to write something different than the traditional girl next door falling in love with a strange guy that just so happens to be a vampire.  I wanted to write about things that have interested me and impacted my life, so I came up with a story that fused vampires, angels, and Greek mythology, and put them all in one epic saga.  I started the concept for this project about five years ago.

The first thing I do is create my main character, then I shape a world that is specifically designed around her.  After that I just write, I write my stories down in notebooks first, as I allow myself to become the characters in my book.  While the words flow, I plot out future events, and situations in a section in the back on my notebook.  It is there—where they wait to be incorporated within the story.

6.      How do you feel now that you’re a published writer? Are you satisfied with your achievement?

Being a published author is a wonderful feeling.  It has always been a dream of mine.  I’m definitely satisfied with my achievement, and I am always looking for ways in how I can improve my writing and success.

7.      Do you prefer self-publishing or the traditional form of publishing?

I can only comment on my self-publishing ventures, because I’ve never experienced the world of traditional publishing.  What I love about the self-publishing industry is that I have a chance to have complete creative control over my project, starting with the content itself, editing, layout, cover design—every aspect of the publishing process is within my hands.

9.      Did you always wanted to be a writer? If not then what was your previous ambition and what made you change your decision and step in the field of writing?

I’ve always wanted to be a writer—ever since I was a little girl.  But I also had the ambition to be a teacher.  Educating and influencing the lives of children is also important to me.  I have a day job as a special education teacher assistant.

10.  Are you currently working on a project? If yes, would you like your readers to have a sneak peek into it?

11.  Any suggestions or advice for the upcoming writers on editing and publishing their books?

Research well, consider all the options and make sure you hire an editor that you trust, and that has the proper credentials to edit your work professionally. 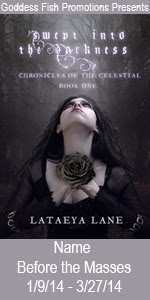 I sat on the sofa resting and enjoyed the time I had alone. I closed my eyes, and inhaled the air, and then I became lost; literally.

I felt myself feeling weightless, and my essence started floating, then I flew in a whirlwind of a tunnel. My leg and arm were back to normal. The casts were gone and I felt no pain. My body flew up to the heavens and I saw the stars appear. I was able to reach out to them, feeling the heat emerge through my body. Then I saw the planets in their orbits and I even saw new planets I didn’t recognize. From where I was the Earth looked round but damaged, it was not the Earth I knew. Lightning flashed and thunder rumbled in the distance, but strangely I was not afraid. Suddenly, heavenly beings approached me. They appeared to be warriors, both male and female. They were dressed in roman armor with silver and gold as bright as the sun. There were others that huddled around the gleaming warriors, dressed in black, the deepest ebony I could imagine. Their eyes peered at me, and large transparent wings surfaced from their broad backs. The creatures were holding hands and hovering in a circle around the Earth with their heads bowed down to the world. They were magnificent.

One of them looked strangely familiar. He stood among the others, and was handsome and more beautiful than I could even fathom. What was this place? Why I was here, and what was he doing here with them? I had so many questions.

Slowly my consciousness came back to my body. My spirit drifted back through the tunnel of time and space and I slipped into my resting physical manifestation.

Years of exposure within the writing and publishing world have made a lasting impact on Author LaTaeya Lane. Writing since she was seven years old, Lane began jotting down phrases and themes later turning them into poems and short stories. Writing became such a passion throughout her youth that she became the Junior and Senior editor of her High school newspaper. She wrote her first novel at age sixteen but was not seeking publication at that time in her life. Lane entered several creative writing contests during her early years of writing and won a few of them. Always captivated by the supernatural and elements of fantasy, Lane was inspired to write a series of books that focused on going beyond the boundaries of life and imagination. The angel vampire fantasy "Swept into the Darkness" is Lane's first published book in a series called "Chronicles of the Celestial." Lane completed a degree in Liberal Studies and currently works to support the education of special needs, middle school students. Lane resides in New Jersey with her husband Leo and son, and is working on writing and publishing the other four books in the series, Dark Betrayal, Dark Revenge, Dark Defiance, and Dark Revelation. Lane also loves to draw and paint.  Traveling and experiencing a variety of different foods is also a deep passion of hers.  Lane loves watching horror and fantasy movies and is a believer of the Ancient Alien Theory. Some of her favorite authors include, Charline Harris, Stephen King and Erick Von Daniken.

LaTaeya will be awarding a $50 Amazon GC and an autographed paperback copy of the book (US ONLY) to a randomly drawn commenter during the tour.


Remember folks, the more you comment, the better are your chances of winning. So start commenting now!!!