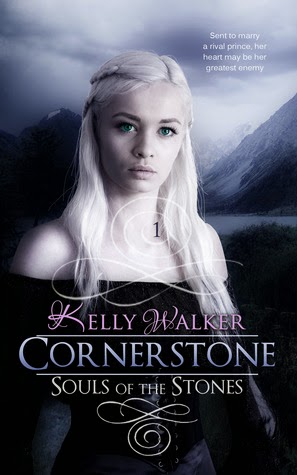 Synopsis:
Epic Fantasy combines with Young Adult romance in this stunning new adventure set in a richly developed medieval world. Second Stone and Broken Stone are now available! Also be sure to look for Jaded Stone, the thrilling prequel to the
Souls of the Stones series.

When Emariya Warren learns enemy forces have captured her father, she’ll do anything to save him. Anything. Even marry a mysterious prince she knows nothing about in order to rally the strength to arrange a rescue. During her journey to Torian’s foreign castle, Emariya comes face to face with her mother’s killers–and a deadly secret.

Not only does Emariya possess a powerful but unexpected magical gift passed down through each of her families, the prince she’s promised to marry possesses a third, and an ominous prophecy has warned the three gifts must never be combined.

If she breaks her promise to marry Torian, she won’t be able to save her father and if she keeps it, she may bring a curse upon everything she holds dear. Determining which choice is best won’t be easy, but when she meets the gorgeous prince who may desire more than just her heart, she realizes she will have to fight just to have a choice at all.

Her heart wants him desperately. Her head begs her to run. If she doesn’t want to share her mother’s fate, she’ll have to find a way to untangle the truth from the lies in time to save herself.

Excerpt:
Strong arms scooped her up off of the cold ground. The warmth of his body radiated through her. She'd been lying on the ground for so long that the wet had infiltrated every layer of her clothing. She was so cold, and he was so warm. Emariya snuggled in against him without thinking about it, and then opened her eyes.
Looking down at her worriedly were the purest gray eyes she had ever seen. If someone had told her they were made of the snow and stone that surrounded them, she would have believed them. Then he smiled at her. Her breath caught in her chest.
His dark hair curled wickedly every which way, despite his attempts to brush it back. She couldn't help thinking that he could have been carved out of rock. He had high cheekbones and an angled chin, which added to the carven look. Several days’ worth of stubble decorated his jawline, but instead of making him look unkempt it only punctuated his deeply handsome dark looks.
“Are you all right, my Lady?” His voice was tense, worried, but strangely lyrical. She smiled reassuringly at him. She was instantly rewarded with his returned smile.
She had thought for sure she heard Garith's voice, but she didn't see him. “Garith?” she inquired, trying to lift her head to look around for him. The man's smile dimmed, although it was no less captivating. He turned her so she could see the other side of the camp. She saw Garith off to the side, working to put out the fire. This handsome, kind stranger must have helped Garith rescue her.
“Who?” she managed to croak out. Her throat was raw and the words ached as they passed through her dry lips. What had happened? She'd been running for Raina when…she remembered then. She'd gotten the oil of the Hellebore on her when Leil touched her. She shuddered involuntarily, remembering the things the hypnotic herb had made her envision while she was under its spell. But that didn't matter anymore.
The smile was back, although it was more guarded now. “Allow me to introduce myself, my Lady. My name is Torian Ahlen.”


Q: Why did you choose to write a YA Fantasy book instead of other young adult sub-genres such as contemporary, paranormal, dystopian, etc.?

I don’t think I really had a choice. I had to tell this story. Sure, I filled in some details, but mostly Riya wrote her own story and I just had to try and keep up. Once it took shape, I had to find a good genre to put it in. The only genre I intentionally stuck to was YA. I like to read YA books, and also because of the age range, I was pretty sure most would want to classify it as YA, so I tried to keep it appropriate.

Q: What distracts you the most while you’re writing?

Everything! The kids, the dogs, facebook, email, you name it. I've had to learn to go into my home office, shut the door and block the internet when I really want to get a good chunk of writing done. Otherwise I get sidetracked.

Q: What is your all time favorite fantasy book?

That’s like asking me to pick a favorite type of chocolate! Hmm, let’s see. Well, I consider fantasy a pretty broad category. I mean, you are asking me to chose between all the Harry Potter books and Twilight books and Outlander and A Song of Ice and Fire. And let's not forget Throne of Glass and Crown of Midnight. There is so much awesome fantasy out there, I can't simply pick a favorite.

Definitely character! For me, characters and maybe a small tidbit about their situation wheedle their way into my head, and then I have to work to figure out exactly who they are, and what their story is. That's not to say I've never intentionally created a character to fill a plot need, but for the most part, especially for my main characters, they are what drive the story.

Q: What advice(s) would you give to writers whose dream is to publish a book?

Do it! Do it right, and do it professionally, but do it. In today’s volcanic publishing landscape, fulfilling those dreams is entirely possible and plausible. Do your research because there are a lot of less than scrupulous people who prey on the uneducated, but if you want to publish a book and you are willing to put in the time and energy and effort, the sky is the limit.

AUTHOR BIO
Kelly Walker is a YA and NA author of several romantic titles, including the Souls of the Stones series. She has an unhealthy appreciation for chocolate, and a soft spot for rescued animals. Her best lessons on writing came from a lifetime of reading. She loves the fantastical, and the magical, and believes a captivating romance can be the most realistic magic of all. Kelly, her husband and her two children share their Virginia home with three dogs who walk her, and two cats who permit her to occasionally share their couch.