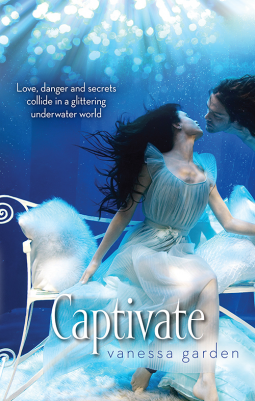 In a glittering underwater world, nothing is as it seems...
For the past twelve months since her parents’ death, seventeen-year-old Miranda Sun has harboured a dark secret — a secret that has strained the close relationship she once shared with her older sister, Lauren. In an effort to repair this broken bond, Miranda’s grandparents whisk the siblings away on a secluded beach holiday. Except before Miranda gets a chance to confess her life-changing secret, she’s dragged underwater by a mysterious stranger while taking a midnight swim.
Awakening days later, Miranda discovers that she’s being held captive in a glittering underwater city by an arrogant young man named Marko...the King of this underwater civilisation.
Nineteen-year-old Marko intends to marry Miranda in order to keep his crown from falling into the sinister clutches of his half-brother, Damir. There’s only one problem. Miranda is desperate to return home to right things with her sister and she wants nothing to do with Marko. Trying to secure her freedom, Miranda quickly forms an alliance with Robbie — Marko’s personal guard. However, she soon discovers that even underwater, people are hiding dangerous secrets...

Dive into a world full of adventure and romance.

The premise of this story was unique and interesting. I was expecting the usual mermaids like ariel with fins and beautiful unrealistic hair. Well maybe the hair stayed true, but instead of being fish like these mer people were actually more humanoid. It was actually an interesting new take on the way they usually portray them. Their world was really beautifully described and I really enjoyed learning about how this world worked. I do wish that we got to see more of it. Hopefully there will be a sequel that will allow me to return to this world.

I liked getting to know the different characters and even came to love a few of them.

Miranda is a calm and level headed heroine who has had a rough past. She is very kind and loving, but has been hurt too much in the past by the loss of loved ones and is afraid to open her heart to anyone else. When she is kidnapped and taken to this underwater world she doesn't waste time getting hysterical. Instead she takes action and does her best to get back to her beloved sister. I liked that she fought back and admired her courage.

Marko is really frustrating and at first its easy to hate him. However, as the story progresses we get to see a bit more of his humanity and so does Miranda. Although his actions are horrendous and he should have never kidnapped Miranda you can kind of see why he did it. He was really just trying to protect his people in any way he could. He was a really intriguing character and I had a great time getting to know him.

I was also very intrigued by Marko's guard Robbie. He is really kind hearted and tries to do what is right even if it goes against his king's wishes. It was easy to see how Miranda could get so close to him. He is a charming and sweet character that is hard not to love.

This story is a beautiful new take on mermaids that you will not want to miss!

My name is Katie and books have and always will be one of my biggest passions in life. There isn't a day that goes by where I'm not seen lost in another world of books. I am a Paranormal Junkie and am not ashamed to admit it. My Favorite Genre is Romance, especially Paranormal Romance, but I read all types of books and am never one to turn down a great story no matter what genre it comes from.