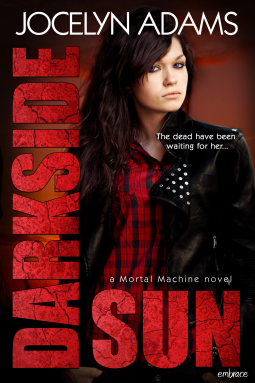 The dead have been waiting for her…

Addison Beckett tries hard to pretend she’s normal, but she’s far from it. Since she was six years old, she’s seen the world around her unraveling, as if someone is pulling a thread from a sweater and it’s all slowly coming undone. When she ignores it, it goes away, so that’s what she does.

Enter her arrogant-but-hot professor Asher Green. He knows all about her special brand of crazy. In fact, he might be just as nuts as she is. Asher insists that the dead from a parallel dimension are trying to possess the living in this one. And since Addison seems to be the only one who can see these “wraiths,” she just might be the key to saving the world.

Addison wants nothing to do with Asher or his secret society, The Mortal Machine. But as their animosity grows, she finds it harder and harder to ignore the chemistry between them. And when she discovers that Machine laws forbid her from touching him, she realizes that’s all she wants to do.

Stop the wraiths. Break the rules. Save the world. All in a day’s work.

Dealing with the paranormal can make anyone crazy!

Right from the start we are thrown into this crazy reality where humans aren't as safe as they believe they are. Wraiths, creatures that come from an alternate dimension have been breaking into our world and attempting to overtake us for centuries and the only ones who can stop it are diminishing in numbers. The paranormal aspects were very well done and had me hooked. I couldn't put the book down and was thoroughly engrossed in this world. The author did a great job of giving us bits of information at decent intervals throughout the book. It was so much fun to discover the mysteries of this world right along with Addison.

Addison was a fun, sometimes sarcastic, and a very relateable character. Shes been dealing with this paranormal stuff from a very young age, but that doesn't make it any less freaky. You would think she would be relieved when she finds out the truth about what shes been seeing, but instead it opens up a whole new can of worms. I really admired her strength and tenacity throughout this book. She had so much dumped on her, but she could roll with the punches and always kept a cool head. Well except where Asher was concerned. She really grew a lot throughout the book and I grew to love her and can't wait to see where she goes next.

Asher could really get on your nerves. He was irritating,arrogant, and just plain grouchy. However as the story progressed we did get to see a bit of his background and kind of understand where he was coming from. He was still arrogant, but it takes time to teach an old dog new tricks. By far he was definitely one of the most interesting characters and I can't wait to see where the story takes him next.

For an exciting new tale in the new adult industry check out Darkness Rising!

My name is Katie and books have and always will be one of my biggest passions in life. There isn't a day that goes by where I'm not seen lost in another world of books. I am a Paranormal Junkie and am not ashamed to admit it. My Favorite Genre is Romance, especially Paranormal Romance, but I read all types of books and am never one to turn down a great story no matter what genre it comes from.