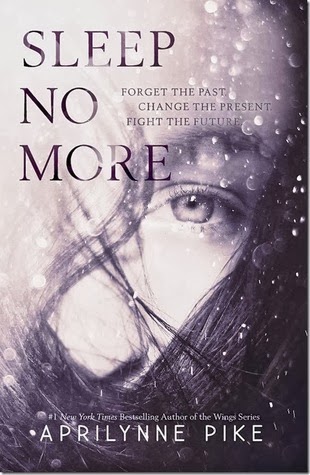 Oracles see the future but are never supposed to interfere. Charlotte learned that the hard way. If she hadn't tried to change one of her childhood visions, her father would still be alive. Since the accident, Charlotte has suppressed her visions to avoid making the same mistake. But when she receives a premonition of a classmate's murder, she can no longer ignore her powerful gift.

Then Charlotte meets someone who not only knows her secret but who also has a way for her to stop the killer. He offers to teach her how to manipulate her visions to change the future. But doing so will put Charlotte in the path of the murderer.…

Aprilynne Pike's bestselling Wings series was called "remarkable" by Stephenie Meyer, bestselling author of the Twilight Saga. And her most recent novel, Life After Theft, was cheered as a "whirlwind adventure" by School Library Journal. Now Aprilynne returns with this exhilarating departure from her previous novels. Sleep No More is a psychological thrill ride that is sure to keep readers' hearts racing until the very end.

I got this book from the publisher, free of cost, in exchange of an honest review from my side.
Firstly I would like to thank the author and the publisher for giving me this opportunity of reading and reviewing this fabulous book.

It was really a superb treat for me and I'm honored to review this book !!!

The concept is nothing new but it has a real feel to it maybe because the author got inspired from a real life experience and poured her emotions in her words which made this read so much more fascinating.

Here we meet Charlotte who is an Oracle but an inactive one. In this world where people are hungry for power and control, the Oracles have kept their powers hidden so that they couldn't be used for anyone's personal benefit. Being a hereditary power, Charlotte shares the same powers with her Aunt Sierra who taught her to fight the visions that she get so that she doesn't get tempted to change the future.

Charlotte had a normal life, well as normal as it can get when you're an Oracle but she has learned the technique to survive but when a mysterious serial killer begins to kill Charlotte's school friends she starts getting more fierce visions that she couldn't fight. She trusts an anonymous person who claims to have knowledge about Oracle stuff and promises to help her out.

Has she trusted the wrong person? Will Charlotte be able to save her friends? Would breaking the Oracle rules and giving the visions passage make her pay big time? What will be the consequences  of her curious actions when she tries to gather the knowledge that her Aunt has kept a secret all her life?

Whoa!!! It was super exciting and thrilling and I promise you wouldn't suspect the actual murderer through out the book and when that person's identity will get revealed you'll be shell shocked just like me. There is so much more that I want to say but I can't because that will ruin the surprise element in here.

Lots of action and drama and also there is sweet and cute romance but at last it wouldn't be a 'Happily Ever After' end for Charlotte. The suspense is so unbearable in here and I read the book in one sitting to get to the end. This was very entertaining and I didn't find it boring for even a second.

The visions have been described in a such a brilliant way that you'll be able to visualize the scenes but trust me it wouldn't be an wonderful experience rather it will be grotesque!!! Family relations and the support that family members give to each other has also been highlighted in here. Charlotte's emotions made me emotional too and I cried and laughed with her through out the book.

The characters were great and I loved Aunt Sierra but we didn't get a lot about her just glimpses of her past life but as her past has a great effect on Charlotte's present so I hope that we readers will get a separate book about Aunt Sierra in her teenage days. Moreover the Sisters of Delphi remained a mysterious organized group of Oracles and I would have loved to know more about them.

The way the book ended I think there is a big opening for a second novel because here we only saw the start of Charlotte's life as an Oracle but we don't know what path will she choose and will she avoid her powers like other Oracles or use it for humanity's protection. I would love to know about her love life or would she remain single through out her life.

So many expectation I have and I hope that we get another novel about Charlotte or aunt Sierra because I don't want this amazing story to stop here. Hope you guys will enjoy this!!! Must read for all!!!

I'm from Calcutta, India (the kingdom of sweets). I'm is a final year college student struggling to get Bachelor of finance honors degree. I love books more than anything and like to hang out with friends, watch horror and action movies and I'm madly in love with vampires and warlocks. Other times you’ll find me with a worn out calculator punching the numbers and making accounts and ledgers (study stuff). In leisure time I sit with a book or my e-reader leaving the known world behind and losing her in the new worlds which the author’s create. I like to write down my thoughts and ideas regarding a story sometimes but never completed it but I'm planning to do so in future and will like to give a chance to my childhood dream of being a paranormal genre writer."