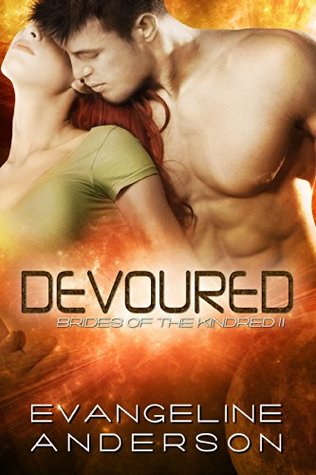 Tess Hughes is on the run from her abusive ex-husband. The problem is, he’s a detective and there’s no place on Earth he can’t find her. Solution? Hide somewhere that’s not on Earth—the Kindred Mother Ship. That’s how she winds up posing as Pairing Puppet—one of the robotic mistresses that service the Unmated Males of the Kindred who need a little sexual stress release from time to time. Of course, Tess never actually performs a Pairing Puppet’s duties—she hides every time a new ‘customer’ comes in. But then she gets caught out in the open…at exactly the wrong time.

Garron of the Rai’ku Kindred has a dragon sized problem and it’s living right inside of him. His dr’gin, the ravenous beast that lives inside every Rai’ku male, is trying to get out. Problem is, if Garron lets it escape, it will eat the first person it sees. He’s burning with need and the more his desire grows, the greater the danger to those around him. Desperate to quench his smoldering desire and keep his dr’gin contained, he goes to the Pairing House…and chooses Tess. Now the two of them are on the run. Expelled from the Mother Ship, Tess is once again menaced by her abusive ex who will stop at nothing to get her back. Garron has sworn to protect her but the beast inside him is more dangerous than any outside threat could be. Can Garron protect Tess from the man who has sworn to destroy her without letting the beast inside him run free? If not, she will surely be…Devoured.

I will admit that as much as I love love love the kindred series I was a bit scared to see where she would go with this, but once again I had no reason to worry. I have no idea how she can continuously turn out stories that not only put me through the wringer emotionally, but she does. Not only this, but I was simultaneously ecstatic at the ending and begging for the rest of the next story!

Anyway this story did a great job of dealing with some really touchy subjects that involve a bad home life. I love how the characters can be so different and yet have similar experiences that can both pull them apart and bring them together. It took me no time to fall in love with these characters, flaws and all.

I didn't think I could love the gentle Garron more, but this book proved me wrong. He is so sweet, caring, gentle, and all around amazing. It is hard to imagine him having a ferocious beast living inside him. Although he can be pretty growly when needed.

Tess is a kindhearted woman with a dark past. She was easy to relate to and I really felt for her. I was a bit skeptical on a few things she did, but understood given her background. However I was pleased that even given her tragic background she still knew how to stand up for herself. She was a strong heroine and kept going no matter how hard things got.

The romance was of course red hot, but not too fast. They had time to build up and get to know each other. This is one of my favorite things about Evangeline Anderson's books. The build up, it makes everything so much better. Its nice to be able to anticipate the happy ending without it being handed to you on a sliver platter.