Bound by a Dragon by Linda K. Hopkins 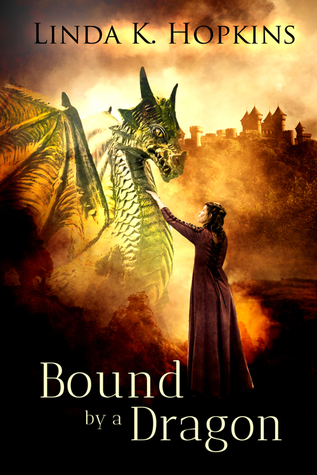 At twenty-two, Keira Carver needs to find a husband, and quickly, but the prospects in her small medieval village are not looking too good. So when Aaron Drake, a handsome stranger, takes up residence at Storbrook Castle, set deep in the surrounding mountains, Keira takes notice. Just as interesting is the fact that a fire-breathing dragon has also moved into the neighborhood, and is rumored to live in caves beneath the mountain fortress. What exactly is the connection between Aaron Drake and the dragon? And when the dragon rescues her from the unwanted attentions of some village boys, who will set out to rescue her from the huge, scaly, fire-breathing monster?

Nothing better than an old fashioned fairytale!

This story had all of the appeal of an old fairytale with a villain, a beautiful village girl, and of course a handsome hero. I loved the fast pace of this story it was a easy read that I enjoyed getting lost in. What I liked best, however, was the depth of the characters. While there was definitely an old fashioned feel to this tale, there was a bit of darkness to it as well. These characters weren't as sweet or as vicious as their exterior may seem. Also while admittedly there were parts that were predictable I was pleasantly pleased at the unique aspects too.

The romance was well paced and a nice change with all of the heated and fast moving love relationships in literature today. It had that old fashioned courtship appeal, but with a bit of spice added near the end as well. I really appreciated that you could see much of the development and how real it felt between them. There were plenty of obstacles, but their reactions and how they handled everything thrown at them suggested that this love was real and something they would work for.

Keira was a capable, brave, intelligent young woman. She loves her family dearly, but felt neglected by them most of the time. I liked that she used her head even when she was scared out of her mind. She was a rational and kind woman that knew how to live life for today. It was easy to see how she capture the heart of Aaron.

Aaron while charming and handsome was not without fault. He could have a temper and throw a tantrum sometimes, but it was nothing Keira couldn't handle. He was very protective and caring even to those who weren't as forgiving to him. I loved him and his intelligent understanding of others.

I think one of my favorite things about this story was how it handled the villains. They weren't treated with prejudice or seen as just an evil person. Instead their actions and motives were actually explored by the characters. Even when it was a detriment to them they tried to understand where that person was coming from.

I highly recommend this book to anyone who likes a good dragon tale and an old fashioned romance!
4 stars adult fairytale fantasy review romance