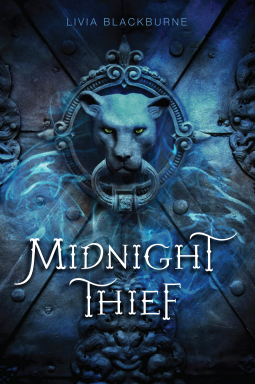 Growing up on Forge's streets has taught Kyra how to stretch a coin. And when that's not enough, her uncanny ability to scale walls and bypass guards helps her take what she needs.

But when the leader of the Assassins Guild offers Kyra a lucrative job, she hesitates. She knows how to get by on her own, and she's not sure she wants to play by his rules. But he is persistent-and darkly attractive-and Kyra can't quite resist his pull.

Tristam of Brancel is a young Palace knight on a mission. After his best friend is brutally murdered by the Demon Riders, a clan of vicious warriors who ride bloodthirsty wildcats, Tristam vows to take them down. But as his investigation deepens, he finds his efforts thwarted by a talented thief, one who sneaks past Palace defenses with uncanny ease.

When a fateful raid throws Kyra and Tristam together, the two enemies realize that their best chance at survival-and vengeance-might be to join forces. And as their loyalties are tested to the breaking point, they learn a startling secret about Kyra's past that threatens to reshape both their lives.

In her arresting debut novel, Livia Blackburne creates a captivating world where intrigue prowls around every corner-and danger is a way of life.

The setting was exciting and mysterious starting out on the streets of a society filled with secrets, danger, and one cheeky girl who is navigating it all. This was a fast paced story filled with a whole lot of action and a good sprinkling of mystery to top it off.

Kyra is a no nonsense kind of girl. She grew up having to be tough and its taken its toll. She does what she has to in order to survive, but still helps those in need whenever possible. I liked her gutsy attitude and the her confidence in her abilities. Kyra was such a fun character to get to know and I didn't want her story to end.

Tristam was a mystery in the beginning, but the more we learned about him the more it was obvious that he and Kyra were very much alike. He was devious, but would do whatever it took to protect his friends. He was not very trustful, but getting to see these two learn to appreciate and trust one another was an adventure all in itself.

For those looking for a thrilling action packed story this is the story for you!
4 stars adventure review ya