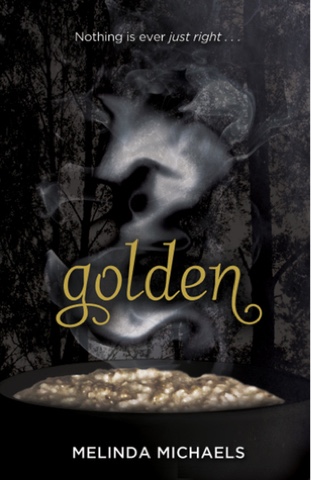 High school senior Hanna Loch just suffered a blackout in front of her entire homeroom class. She hasn’t had one in over ten years, and she’s terrified—the last time she blacked out, she woke up with no memory of her life before. To make matters worse, no one can explain why it happens. For Hanna, bad things tend to come in threes.

When she learns she could be a descendant of someone who lived /once upon a time/, Hanna must put her trust in William Vann, a descendant of one of the most hated villains ever known. Their histories are intertwined in more ways than she expected, and he has answers about her past, answers even her family won’t share.

But is it safe to put her trust in someone who appears to be danger reincarnate, while trying to escape the darkness that tried to kill her ten years ago?

Reality and fantasy collide in this romantic adventure!

As an avid fan of fairy tale retellings, I was extremely excited to read Golden  and I was not disappointed. The story is set in our world with everyday people. However, there was magic at work, messing with people's lives. One of the things I really liked about this book was that it used the original tales instead of the watered down versions that were told over time. It helped to keep with the original lessons as well as introducing a few of its own. The thing I like most about fairy tales is how they are timeless and even retellings have a few words of wisdom within their pages.

The theme throughout this book was that everything wasn't always so black and white. There was no clear line dividing the villains and the heroes. It also gave a bit of mystery to the story. I love guessing who everyone was and figuring out right alongside Hanna, exactly who the real villains were.

Hanna is a down to earth girl who likes to read fairytales, but doesn't necessarily believe in them. I really liked her level headed nature and the way she always tried to take care of others. She didn't whine bout her misfortunes and instead spent her time trying to find solutions. She also has a bit of sass to her which she lived using in William.

William was an interesting character to et to know as well. He was complex and a little naughty at times, but he had a good heart. One of my favorite aspects about this character was that even hitch he worried about Hanna m, he never once tried to co trip her. He respected her decisions and saw her as the intelligent woman she was, instead of a little girl that needs o be protected from everything.

The idea for his story was really original and I liked how she weaves in all of the different fairytale chapters and gave them more complex personalities. I am really hoping this will continue in into a series, as there are still a lot of characters with stories I would like to get to hear more of. Owen, especially, I would love o ear how his story ends.

If your looking for happily ever after with a twist, check out Golden!