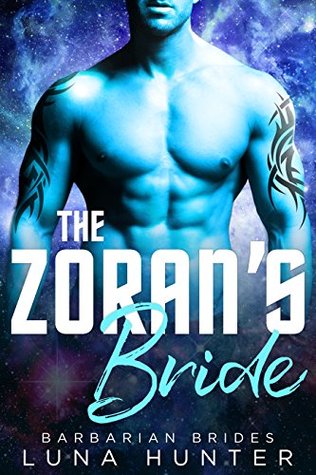 My new bodyguard? A possessive, dangerous alien warrior who wants to claim me as his prize! Oh boy!

Decades have passed since the Tyk’ix destroyed the Zoran home-world. The fierce, sexy alien warriors have found refuge on Earth, but adjusting to this new reality has not been easy for either species...

Sarah Granger wants nothing to do with the aliens her father died protecting the Zoran, and she’s yet to forgive them. When the Human Federation plans a mission into deep space to find a new home for the alien warriors, she volunteers, and to her own surprise, the curvy scientist gets the job! She couldn’t be happier. Until, moments before launch, the Federation assigns her a bodyguard. And not just anyone: The most dangerous, arrogant Zoran warrior imaginable, who won’t leave her alone for even a second!

Kazim has never seen his home-world. The alien warrior grew up an orphan on the streets of Boston with nothing to his name except his fists and his indomitable will. The blue-skinned Zoran is the undefeated boxing champion of the Boston underworld - until the local kingpin asks him to take a dive. Instead, Kazim knocks his human opponent out so hard it kills him, and now the entire mob is out for his blood!

The wanted alien warrior needs to lay low for a while, and using his connections, manages to hitch a ride on a human ship heading into deep space. All he has to do is protect Sarah Granger from harm. An easy job for a warrior as tall and strong as him… Until he sees her and he realizes in an instant that he’s found his fated mate!

Resisting his urge to claim her is the hardest battle the alien warrior has ever fought!

For lovers of alien romance this is a must read.

I liked the different take on aliens in this book in that they were already a part of earth and not something completely unexpected to our heroine. This way we are able to explore the interactions between aliens and humans for long periods of time and how that affected the different species.

Of course the best part is the interaction between Sarah and Kazim. Two very different people and yet they found a common ground to come together.

Kazim is rough around the edges and very defiant, but has a soft spot for his little human. Of course this doesn't stop him from being a little naughty and creating some very steamy and holarious situations for the two.

Sarah is a strong and beautiful woman with a heart of gold. I loved that although she started out having a hard time standing up for herself, except for when she was with Kazim, that she was able to grow and become stronger.

These two really brought out the beat in each other and I couldn't help, but root for them.

Luna Hinter knows how to write a sizzling romance and I can't wait to meet more Barbarian Brides!