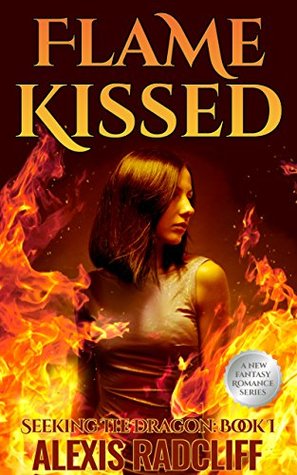 On a romantic night at a ski lodge, 17 year-old Ella Denton has the perfect opportunity to finally confess her feelings to her long-time crush, Nick Gauss, before she goes off to college. But before she has the chance, everything goes horribly wrong: Ella is kidnapped by a mysterious grinning monster-man to the heart of the Ether-Realm, a magical land with a strange red sky at the nexus of all possible worlds. She is placed in chains and taken to a golden city ruled by the dark and brooding dragon prince, Kaden Kolrath, and told that she is now his slave.

It seems her fate is now to be lost forever in a strange land far from home, never to return to Nick or her family back home in Havery Falls. That is, until Ella discovers she carries a mysterious spark of power… a spark that could change everything, forever.

Flame Kissed is the first book in Alexis Radcliff’s exciting new fantasy romance serial, Seeking the Dragon. It’s a short, 15,000-word novella perfect to knock out in a single, quiet evening, and one of five total episodes.

Flame kissed is the exciting beginning to a fantasy serial that had me engrossed from page one.

The world building done in this first episode was beautiful and gave just enough information to leave me wanting the next book asap. We are introduced to a world of magical beings called the Aethlings and a dangerous prince called the Drogon. I was utterly enthralled with this first taste of the world and can't wait to delve even further in the next episodes.

Ella lost her parents in a mysterious fire and was adopted by a loving family, but as much as she adores her new parents and siblings she could never quite forget her birth family.

I really liked Ella and found myself  relating to a lot of her quirks. She is a fun character that wants nothing more than a simple life, but she has a fire in her that comes out when she needs it most. As gentle as she was she didn't allow herself to be pushed around and it was one of the things I liked best about her. Instead of allowing herself to be tossed around by her captors she actively fought them even knowing how futile it might be.

I can't wait to see how Ella reacts to the terrible situation that has been thrust upon her and can't help, but root for her. I look forward to learning more about Ella and this dangerously beautiful world she has fallen into.