"The Second Son" by Elise Marion Excerpt and Giveaway 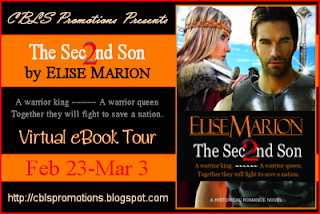 As a child I always had my nose in a book. From R.L. Stine to Chronicles of Narnia to The Babysitter's Club and Sweet Valley High, I read it all. When I started Junior High and found out that the school library had over 400,000 books, my goal was to read every single one! Of course I didn't achieve that particular goal, but I sure had fun trying!
In high school I developed a talent for writing and discovered romance. Needless to say I combined my love for both and am now a published Indie author. After almost a year of peddling my book from agent to agent with no success I decided that my work was good enough despite the constant rejection. That's when I discovered the world of indie publishing through e-books. I couldn't have made a better decision than stepping out on faith and doing something for myself instead of waiting around for someone else to do it for me.
A litle bit more about me: My husband Kevin and I have been married for 4 years and have two beautiful children, Haley (4) and Gavin (4 months). We are a military family, which means I spend a lot of my time alone with two children. People often ask me how I deal with the military life. I simply say, someone's got to do it, right? I am proud of my husband for serving his country.
When I'm not reading (which is almost always) or writing (I try to every day), I am watching movies (which I love), cooking (which I love even more) or watching someone else cook on TV (love me some Paula Deen). I have been singing my entire life and enjoy being my church's choir every Sunday. My large, extended family is close and means the world to me.