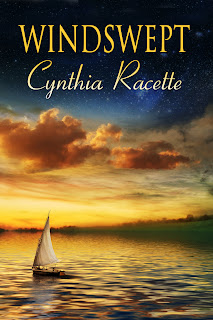 Sailing Windswept has always been a family affair, and many of Caroline and David Hartford’s fondest memories have taken place on Chesapeake Bay, sailing in all kinds of conditions and exploring the bay.
When husband David is unfaithful and commits the ultimate betrayal by bringing his mistress aboard Windswept, Caroline’s world is shattered. He leaves her and she is forced to rely solely on herself for the first time in her life. She has to be a single parent to her daughter, Lily, and to decide if she can forgive David for tearing her family apart.
As David and Caroline work to put their marriage back together, events and other people conspire against them, over and over. As their relationship begins to heal, the couple is caught in a horrific storm and waterspout on the bay, heading straight for Windswept. They want a chance to love again but Mother Nature might have other ideas.

An entire day to work on a new and exciting book, knowing that tomorrow I have to break from that for my new release.

I didn't really have to do any research for this one, because my husband and I are avid sailors. I could have gone on and on about the sailing and shown videos and everything! But I figured that'd be going over the top a little. I had to look up a few details for the chemistry in Caroline's job, but not much.
3.       Is there any character in particular that you enjoyed writing about the most?

I enjoyed writing about both Caroline and David for different reasons. Caroline was coming into her own and learning she could function independently of David so that was neat to write. David was a smart man with principles and love of his family and he had a lot of trouble learning to cope with what he'd done. He beat himself up over it repeatedly.
4.       Were any of your characters or events from the book based of real life people or experiences you have had?

Not the characters, but as I mentioned, the sailing experiences I've experienced. My husband and I went through the kind of experience Caroline and David do near the end of the book, although I ramped up the drama. I have also experienced the kind of emotions Caroline did as her first product rolled off the production line-- that happened to me almost exactly as described in the book. I also experienced the lay-off and it's just like I described in the book. Horrid.
5.       Are there any other projects you are working on that you would like to tell us about?

Sure! I'm in final revisions for another women's fiction novel about a woman whose husband is killed, leaving her in huge debt and with two children to raise. The road to financial and emotional independence is very rocky as her teenage daughter is picked up for shoplifting and then worse. She meets a man and his family who are struggling through unemployment just to put food on the table and the detective who arrests her daughter shows interest in her and that infuriates her daughter no end. I like to write about women who must learn to become independent in life.
6.       Did any of your characters give you a difficult time while writing this book?

None of them acted up much except Matt-- Caroline and David's best friend who makes a move on her and alienates David in the process.
7.       Cappuccino or Coffee

Coffee all the way. I don't go in for fancy coffee drinks. The best coffee is made in a diner and drunk while eating a piece of their apple pie.
8.       What do you like to do in your down time?

I read. A lot. I panic if I'm running out of books on my Nook or the stack from the library is down to one. My retired hubby and I like to travel. We just got back from two weeks in Florida and are planning a big trip to Europe this upcoming fall: London, Ireland, Paris, Rome and Venice. Can't wait.
9.       Do you relate to any of your characters?

I know men like David but I relate, probably naturally, to Caroline. I had a job I absolutely loved and was very good at, including some awards, and got laid off because they were terminating the product I was working on. A few months later, my company was bought by a larger company and a few months after that, closed its doors. It's an extremely humiliating and traumatic experience.