Dawn of the Arcana by Rei Toma 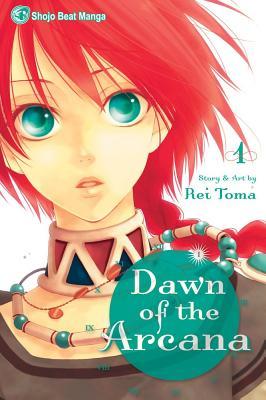 Princess Nakaba of Senan is forced to marry Prince Caesar of the enemy country Belquat, tantamount to becoming a hostage. While Caesar is pleasing to the eye, he is also selfish and possessive, telling Nakaba outright: “You are my property.” With only her attendant Loki at her side, Nakaba must find a way to cope with her hostile surroundings, her fake marriage...and a mysterious power!

This is an amazing series that has a lot of depth and emotion both in the characters and the storyline. I was a bit unsure of this at first, but after the first chapter was quickly drawn in. The story is a bit slow at first, but has enough intrigue and action to keep me at the edge of my seat.

By far the best part of this series is the relationships between the three main characters Nakaba, Loki, and Caesar. They each have their own unique personality and many times they clash with each other, but little by little we see some of the softer sides of them and how even when they absolutely hate each other they are able to bring out the best of each other.

Nakaba is calm and generally level headed, but her fiery temper comes to the forefront whenever someone threatens Loki. Nakaba and Loki do not have a romantic relationship, but their love for one another clearly shows through. Loki would give his life for Nakaba and she in turn would do the same. Although I love these two I did like seeing them coming to trust others a little more as the series went on. It showed how much they had grown.

On a side note I am secretly hoping that maybe just maybe there will be something between Nakaba and Loki in the future, but so far no good.

Caesar definitely has one of the bigger personalities in the book. He is obnoxious, arrogant, rude, insensitive, and yet at the strangest moments a softer side of him is shown. I think out of all of the characters he has grown the most. Though it happens gradually he does seem to show more of his true self as the series progresses. I liked this character because of how interesting and unique he was. He may not be someone I would be friends with in real life, but he definitely brings makes things livelier wherever he goes.

I cannot wait to read more of this series and highly recommend this to all shojo fans!
4 stars historical manga review romance shojo