Surrender Your Love by J.C. Reed 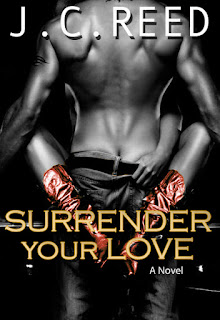 Brooke Stewart, a realtor in New York, doesn’t do relationships. When she’s sent to a remote estate to finalize a real estate deal, she discovers her new boss is no other than the guy she left naked in bed.

Sexy, dangerously handsome, and arrogant Jett Mayfield attracts trouble, and women, like a lightning rod. But the night he meets Brooke he gets more than he bargained for. The green-eyed millionaire playboy isn’t used to taking no for an answer, and he isn’t about to start now.

When he proposes two months of no strings sex, Brooke is intrigued and accepts his proposal. Little does she know Jett’s determined to claim the one woman he can’t have, pulling her deeper into his dangerous world.

A man who doesn't take 'no' for an answer.
A woman afraid to surrender to love.
Two lives that are about to cross...and secrets laid bare.

Jett doesn't know the meaning of no and Brooke does her best to teach him it. However neither of them is going down without a fight and in the game of love its anyone's game.

This is a fast paced romance with tough heroine's, annoyingly sexy hero's, and some great action. New York was the perfect setting for these two character's and really matched there stubborn attitudes. My favorite part of the book was the steamy and sometimes hilarious banter between these two. I always like a good battle of wits. The romance itself was nicely paced and believable. There was definitely some chemistry between Jett and Brooke and it practically sizzled of the pages.

Brooke isn't one for permanent relationships. She is a fun, smart, and independent heroine that knew how to get things done. I really liked her and felt that she was a perfect match for Jett.

Jett has a similar personality to Brooke and yet from the moment he meets her he knows he has met his match. He is charming and witty, especially with Brooke. Jett is a bit stubborn, but it proves to be a benefit when it comes to Brooke. I really enjoyed seeing how he went about wooing Brooke.

For a fast paced romance and some fun banter check out Surrender Your Love!