Walk on the Striped Side by Jessie Lane Cover Reveal 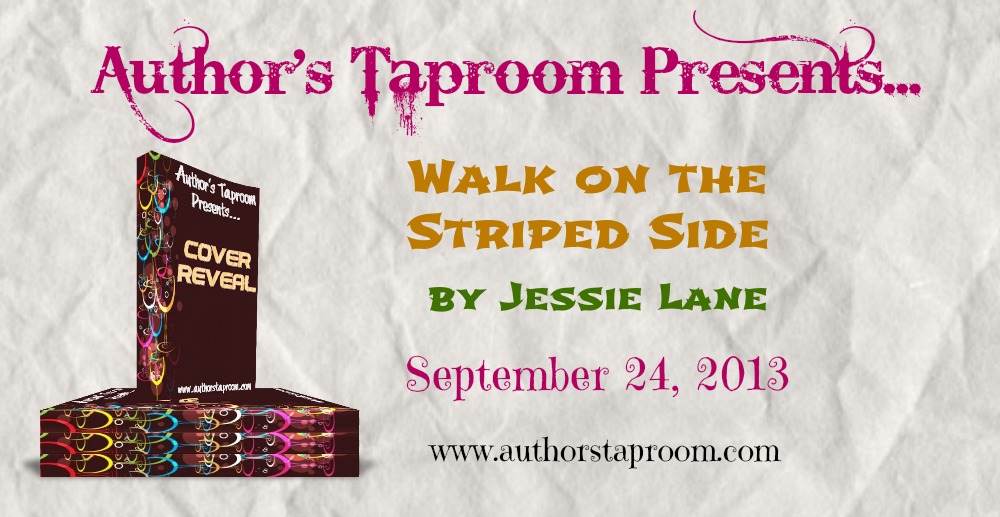 Title Walk on the Striped Side
Author: Jessie Lane

Book Blurb:
Does he have his claws in her for good? Or is she just yanking his tail?

Elena Demos’ life has been turned upside down. Her mother passed away, leaving Elena and her two half-sisters to deal with their mother’s will and the crazy stipulations in it. For the three sisters to inherit the substantial amount of money left behind they have to go work with two Aunts they’ve never met, in the family business they knew nothing about. Amazons Inc.. If that wasn’t bad enough, she runs into the man who broke her heart their first day on the job.

Gage Ivanov is a stupid beast. He let the woman who should be his mate go because she couldn't be told of his Other identity.Now Elena’s back, but she refuses to give into his demands for her to be his mate. The timing for all of this couldn’t be worse. Gage and his circle of friends are trying to subdue a rogue pack of wolf shifters in Germany who threaten to out the Others to the world of humans. Will he be able to juggle the oncoming conflict and win back his mate?

Claws have never been this sexy.

Never mind how good she looked, or that she smelled like sex on a stick, he was going to bend this arrogant young woman over his lap and paddle her ass for talking to a higher ranking soldier like that. For talking to him like that. His tiger was going nuts underneath his skin. The need to exert his dominance over her, to show her just who the fuck was in charge here, was riding him hard.Harder than ever before. Which bothered him. Combine that with the insane urge to show her who the bigger predator was caused a niggling suspicion that there was more going on here than good old fashioned annoyance or the need to lose himself in a warm willing body.

Sucking on his teeth in extreme agitation he opted for denial. There was absolutely no way that this woman could be a possible mate. Surely fate wouldn’t be so cruel as to try and pair him off with a fragile human that could be easily killed. He wasn’t entirely sure, but the signs of compatibility were there. The natural pheromones to attract one mate to the other. His Tiger going wild inside of him.

He was going to choose to think that those pesky coincidences didn’t mean shit.Even better, he was going to ignore those signals in the name of self-preservation. He’d never wanted a human for a mate in the past, and that wasn’t changing over an intoxicating scent, a pair of unusually pretty eyes, and the need to fuck a better attitude into her. Nope, he’d rather be mate-less. Or settle for a mate that both his human and beast’s side didn’t crave with a dangerous intensity. He would rather find a mate they could grow to care for, and who would be something much sturdier than a very breakable human.

Since he wasn’t paying attention to her at the moment, he only distantly heard her say, “Helllllloo… Master Sergeant Ivanov? Are you sure you want to stick to that story about getting some sleep? Because you don’t seem to be all there upstairs to me.” Delicate fingers snapped in front of his face a couple of times, bringing his attention back to the object of his thoughts. As he looked at her impatient face he made a silent vow to himself. Mate possibility or no, if the disagreeable woman didn’t stop antagonizing him, he was going to break every unspoken rule in the supernatural Othercommunity and unleash his claws on her backside. As his eyes zeroed in onto the unconscious nervous movement of the tip of her pink tongue swiping over her bottom lip, Gage thought. Claws and a good pop on the ass ought to scare some respect into her.

Jessie Lane is the writing team of Crystal Leo and Melissa Pahl. The two sisters-in-law share a passionate love of naughty romance, cliff hanging suspense, and out-of-this-world characters that demand your attention, or threaten to slap you around until you do pay attention to them. Because really, it is ALL about the characters. (They’re kind of megalomaniacs – but don’t tell them that we said that.)
Crystal lives in Kentucky with her husband, little 7 and 9 year old Rock Chicks in the making, and her Dad who likes to play the air guitar while listening to George Thorogood’s Bad To The Bone. Melissa just moved to Minnesota with her husband and giant furry Rottweiler baby named Yuffi. Crystal is now trying to talk Melissa into “polar bear” swimming in Lake Superior, but so far Melissa is adamantly telling her no.
Their first YA novel, The Burning Star, was released in May 2012. Big Bad Bite was their second novel, but their first adult paranormal romance, and released in January 2013. Their third book, Secret Maneuvers, just releaseed this past June, and will be the start of a new adult contemporary romance series (Ex Ops Series). They are now working on their next three novels, Walk On The Striped Side (Big Bad Bite Series #2), Stripping Her Defenses (Ex Ops Series #2) and The Frozen Star (YA Star Series #2).With these projects underway, they are looking forward to showing the rest of the world their crazy stories, heroes and heroines that often plague their minds until written, and hope you will join them on their journey!
Social Websites: