The Defiant Bride by Leslie Hachtel 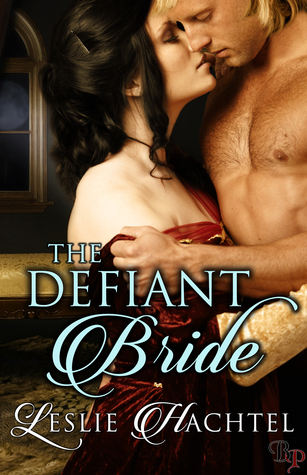 Furious at being used as a political pawn, the Lady Dariana defies King Henry VII by faking her own death to avoid marrying a man she has never met. Praying the king will not retaliate against her father, she seeks refuge in the forest and learns to fend for herself. When William, a warrior knight, is felled by an arrow, she saves his life and arranges his rescue before fleeing to avoid discovery.

William awakes from his injury to be told he imagined the beautiful woman in the forest. Besotted and determined to make her his own, he hunts her down and tricks her into marrying him, intent on turning her defiance into love. But even as he begins to succeed, their enemies join forces to end the marriage—even if it means that Dariana must die.

When Dariana is abducted, William must track her down to fight for her life and their happiness. And, Dariana, once the most defiant of brides, must channel her own strength of will into survival, both for herself—and for the child she now carries.

This was a fast paced romance that I couldn't put down. We are thrown right into the thick of things from page one. The characters are vibrant and the romance was sizzling. The spark between Dariana and William is instant and all encompassing, but this spunky beauty doesn't give in without a fight.

Dariana was a vibrant and firey young woman who didn't take things lying down. Most young ladies her age are all married and have children of their own, but Dariana has been given the gift of choice, until now. Dariana was brave and daring, especially for a woman of her time. I really liked seeing how she handled things. I respected her ability to make choices and deal with the consequences, for better or worse. She wasn't a wilting violet that would cry and bemoan her fate. Instead she took charge and did her best to make her own way.

Her stubborn will and defiant nature really gave William a run for his money. I liked the exchanges between these two, even when they were at each others throats. They really are a match made in heaven and they sure knew how to heat things up.

William was an alpha male through and through. He was at deaths door when he first met Dariana and was taken in at first sight. His determination to find and have her was unstoppable. he pursued Dariana relentlessly and once he had her made sure to protect and cherish her as the woman he loved. William has a stubborn side that matches Dariana, which didn't always work out for him. Luckily, his sister was able to help him when he was being especially pigheaded.